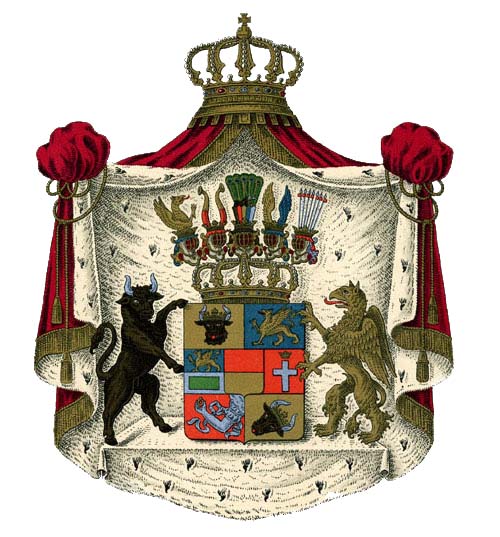 The shield itself is split into six quarters, two wide and three deep with a central shield. The quartering’s are arranged in the following order:

(centre helmet) Duchy of Mecklenburg, out of the crown are five pales conjoined: azure (blue), Or (gold), gules (red), argent (silver), sable (black), surmounted with a peacocks tail made up of five feathers upon which is a half obscured crowned sable (black) buffalo’s head.

(second from the right) County of Schwerin, two expanded wings, the sinister (left) Or (gold) and the dexter (right) azure (blue).

(second from the left) Lordship of Rostock, two erect elephant trunks divided “per fess” (half horizontally), top half Or (gold) and bottom gules (red).

(far right) Principality of Ratzeburg, seven erect lances each with a small gules (red) banner near the point of each lance with one part flowing dexter (right) and the other to the sinister (left).

The dexter (right) supporter of the shield is an Or (gold) griffin with extended gules (red) tongue. The sinister (left) supporter is a sable (black) bull with argent (silver) horns and tail held aloft.

The mantle surrounding the shield consists of a purple cloak with ermine lining, tasselled and fringed with Or (gold) string and is surmounted with a grand ducal crown. The shield is also ensigned with a royal crown without a cap.