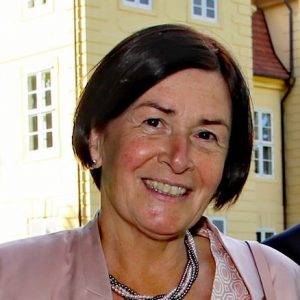 Duchess Alice was born on 2 August 1959 in Hinterzarten. Christened Alice Marianne Wagner, she is the daughter of Dr Jürgen-Detlev Wagner and his wife Marianne, née Biehl.

Duchess Alice grew up in Hinterzarten in the southwest German state of Baden-Württemberg where her father ran a medical clinic, she received her education in the village at the Birklehof School.

Duchess Alice was married to Duke Borwin at Hinterzarten on 24 December 1985 in a civil wedding followed by a religious wedding on 19 July 1986. The couple have three children, Duchess Olga, born 1988, Hereditary Prince Alexander, born 1991, and Duke Michael, born 1994.

Duchess Alice and Duke Borwin live in the Black Forest region of the state of Baden-Württemberg where between 1988 and 1995 they managed a hotel together. Duchess Alice is also active in the local community having served as a member of the municipal council of Hinterzarten.