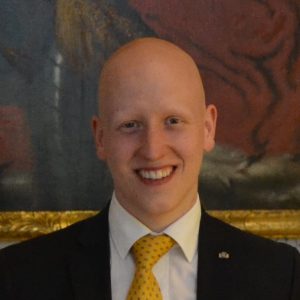 Duke Michael M.A. was born on 30 January 1994 in Freiburg-im-breisgau. He is the youngest child of Duke Borwin and Duchess Alice.

Duke Michael was christened into the Roman Catholic Church with the names Carl Michael Borwin Alexander Georg Friedrich Franz Hubertus Maria.  Among his godparents was Duchess Donata of Mecklenburg-Schwerin. As has been traditional for the second son of the family Duke Michael received Carl as his first Christian name.

Duke Michael grew up in the Black Forest region of the state of Baden-Württemberg in southwest Germany where he received his primary schooling and the initial part of his secondary schooling. Away from his studies he spent time volunteering at a number of social centres in the region helping to care for elderly and disabled people.

In 2010 Duke Michael left Germany to finish his secondary schooling at Wilson’s Hospital School in the Republic of Ireland. During his time in Ireland he gained bronze and silver Gaisce award’s (The President’s Award), while at the end of the 2013 academic year he was named Bank of Ireland Student of the Year in Wilson’s Hospital School. At Wilson’s he pursued interests in Tae Kwon Do, in which he gained the rank 9th Dan, and rugby in which he represented the school team. Other interests include outdoor pursuits like hunting, fishing and climbing.

After leaving Wilson’s in 2013 Duke Michael began studying BA International Studies at Leiden University in the Netherlands. At Leiden he became a member of the Academic Committee of the Bachelor Students of International Studies (B.A.S.I.S.) study association during his first year and its president in his second year. He also became Chief Junior Editor for the Diplomat Magazine, whose headquarters are in The Hague, and an organiser for the Tulips Ball.

After gaining his BA in 2016, Duke Michael remained at Leiden to study for an MA in International Studies with specialisation on Global Conflict in the Modern Era, which he graduated with in January 2018.

Since the end of his studies Duke Michael has worked in the defence and security sectors at the Munich Security Conference and the Stockholm International Peace Research Institute (SIPRI). He also spent time serving in the German Army.