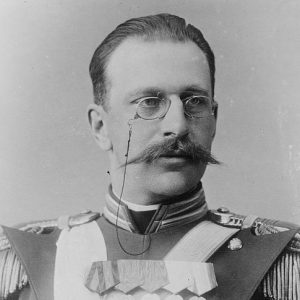 Duke Georg Alexander, PhD was born on 6 June 1859 at the Remplin Palace. He was the eldest surviving son of Duke Georg and Duchess Ekaterina.

Duke Georg Alexander was born during his parents visit to Mecklenburg for the 80th birthday celebrations of his grandfather Grand Duke Georg. His christening into the Lutheran Church took place at Remplin on 10 July 1859 where he received the names Georg Alexander Michael Friedrich Wilhelm Franz Carl. Amongst his godparents were Grand Duke Georg, Emperor Aleksandr II of Russia and Grand Duke Mikhail Nikolaevich of Russia.

Duke Georg Alexander’s education began at the age of 7 through home tutoring. Having been made an Ensign of Grand Duke Mikhail Pavlovich’s 1st Artillery Brigade shortly after his birth, Duke Georg Alexander’s parents wish for him to pursue a career in the Russian artillery meant a military education was an area of particular focus for his studies. Among other topics covered during his education were the Latin, Russian, German, French and English languages and music which would become his greatest passion. He received tuition from the famous Russian cellist Karl Davydov and developed into a talented cellist himself.

Duke Georg Alexander’s father did not live long enough to see his son pass his artillery officer exams and gain the rank Second Lieutenant in June 1879 having died three years before. A full time army career was not yet taken up however as at the end of 1879 Duke Georg Alexander left Russia to continue with his studies in Germany. He spent his first three semesters abroad at the University of Strasbourg attending lectures on law, national economics and the history of the revolutionary period. He also received private tuition in Roman law and state law.

In Easter 1881 Duke Georg Alexander transferred to the University of Leipzig where he spent a further three semesters continuing his studies in national economics and taking up the study of international law, the history of art and culture in the Renaissance period and the history of Germany from the Congress of Vienna onwards. During his time at university Duke Georg Alexander further developed his passion for music by receiving private tuition from noted professors Gustav Jacobsthal in Strasbourg and Carl Reinecke in Leipzig, and during this period a piece of his own composed music, ‘Suite for String Instruments’, was performed at the Neustrelitz Theatre in 1882. Duke Georg Alexander received his Doctor of Philosophy degree from Leipzig in 1883.

With the end of studies Duke Georg Alexander now pursued a full time career in the Imperial Russian Army. On 30 August 1882 he was promoted to the rank Lieutenant of the Guard and began serving in the Grand Duke Mikhail Pavlovich’s 1st Artillery Brigade. In 1889 to become familiar with the cavalry Duke Georg Alexander joined the Life Guards Mounted Grenadier Regiment on an initial three year secondment before the move was made permanent.

On 14 December 1902 Duke Georg Alexander gained promotion to the rank Major General and appointment as Commander of the Life Guards Dragoon Regiment and he was commanded his regiment in St Petersburg during the Russian Revolution of January 1905 until the situation in the capital had stabilised. In 1906 he was appointed to the Retinue of the Emperor of Russia and was made commander of the 1st Brigade of the 1st Guards Cavalry Division before being appointed placed at the disposal of the Commander-in-Chief of the St. Petersburg Military District a year later.

As a young man Duke Georg Alexander fell in love with Natalia Feodorovna Vanljarskaya, a lady in waiting to his mother, making it the first time a member of the House of Mecklenburg-Strelitz had wished to marry a spouse who although belonging to the nobility did not belong to another royal family. Despite the initial reservations of his mother, the couple were married on 14 February 1890 at the Mikhailovsky Palace’s private chapel. Apart from his immediate family the wedding was also attended by Emperor Aleksandr III and Empress Maria Feodorovna of Russia and other members of the Russian Imperial Family.

Although his uncle Grand Duke Friedrich Wilhelm had consented to the marriage, as Duke Georg Alexander was firmly established in Russia and his new wife fiercely proud of her Russian identity the marriage did not receive official dynastic recognition and Duke Georg Alexander renounced his rights to the throne. Because any children from the marriage would not be dynastic members of the House of Mecklenburg-Strelitz, in order to compensate for this on 18 March 1890 Grand Duke Friedrich Wilhelm bestowed the hereditary title Countess of Carlow upon Natalia. As such the couple’s four children Catherine, born 1891, Marie, born 1893, Natalia, born 1894, and Georg, born 1899, all bore their mothers Carlow title.

After the death of Duke Georg Alexander’s mother in 1894, he and his siblings sold the Mikhailovsky Palace to the Russian Emperor Nikolai II. Duke Georg Alexander then acquired as his family home 46 Fontanka, a river embankment mansion in St Petersburg, while the Oranienbaum Palace served as their summer residence.

Alongside his army career Duke Georg Alexander pursued his passion for music and supported a number of charitable organisations. Able to play the cello, piano and violin and being a composer of his own music, his 46 Fontanka residence was regarded as one of St Petersburg musical centres. He was a member of the Imperial Russian Musical Society, whose first president was his grandmother Grand Duchess Elena Pavlova, and in 1889 he was tasked by the society with heading up a committee to mark 50th anniversary celebrations of the career of the famous Russian pianist and composer Anton Rubinstein.

In 1896 Duke Georg Alexander established his own string quartet called the Mecklenburg Quartet and enlisted a number of talented Russian musicians to its ranks. He was deeply involved with his quartet and would directly oversee their rehearsals at his 46 Fontanka residence. The quartet itself proved highly successful not only in Russia but also in the other major European capitals where they held concerts.

Unexpectedly in the early hours of 5 December 1909 Duke Georg Alexander died suddenly aged 50 at his St Petersburg residence having returned from the Artillery Club the night before. In line with his wishes he was therefore buried in Oranienbaum rather than in the family crypt in Mirow.