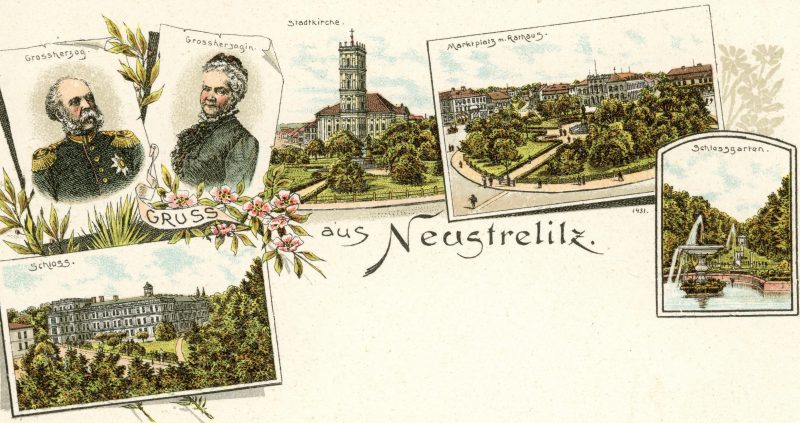 The Residence Palace and connected buildings

What was to became Schloss Neustrelitz was originally a hunting lodge built around 1710/1711 in Glienke on the Zierker lake. After the loss in a fire of the Schloss in the capital Strelitz during the night of 24 to 25 October 1712, the Ducal family were forced to live in hunting lodges for a number of years. Over the years 1726 -1731 the architect Christoph Julius Löwe was given the task of expanding the hunting lodge turning it into a Baroque styled three-storey, three-winged building. The building became the principal residence of Duke Adolf Friedrich III in 1733. Around the new Schloss the town of Neustrelitz was built eventually becoming the new capital of the duchy. Over the years the Schloss was expanded and changed. It remained the seat of the Duke and then Grand Duke’s up to 1918 when the monarchy in Germany came to an end. The Schloss then became property of the new Free State serving as the new republican states parliament. Like the original ducal residence Schloss Strelitz, Schloss Neustrelitz was destroyed in a fire on the night of 29/30 April 1945.

The palace garden (Schlossgarten) was originally created in French Baroque style by Christoph Julius Löwe between 1726 and 1731. Duke Adolf Friedrich IV inspired by a trip to Versailles had the gardens redesigned. In 1842/43 the Prussian landscape gardener Peter Joseph Lenné was enlisted to transform the garden using the English style. In the garden the Queen Luise of Prussia memorial was built in 1892.

The Orangerie was commissioned by Duke Adolf Friedrich IV in 1755 for the purpose of housing exotic plants during the winter months. It was transformed between 1840 and 1842 by Friedrich Wilhelm Buttel who turned it into a garden salon. The halls were painted and decorated with bright colours and beautiful ornaments and murals with the rooms equipped with antique statues.

The royal stables were built in 1870-1872 based on the designs of the late architect Friedrich Wilhelm Buttel. In addition to the stables themselves the building consisted of an indoor riding arena and housing for grooms and coachmen.

After the war and the expropriation of the majority of the Grand Ducal Family’s properties, Parkhaus was one of the few properties to remain in the family’s possession and served as the home of Grand Duchess Elisabeth until her death in 1933.

The Marienpalais in Neustrelitz, designed by the court architect Friedrich Wilhelm Buttel, was built in 1850 as a residence for Grand Duchess Marie (born Princess of Hesse), the wife of Grand Duke Georg. Widowed in 1860 the building underwent expansion in 1874.

After her death in 1880 it was inherited by her Russian based grandchildren Duke Georg Alexander, Duke Carl Michael and Duchess Helene who used the property during their yearly visits to Neustrelitz. The Marienpalais remained in the possession of the Grand Ducal Family until its forced sale to the state in 1922.

With Adolf Friedrich’s marriage in 1877 the Carolinenpalais became the official residence of the Hereditary Grand Ducal family, remaining as such until 1904 when Adolf Friedrich succeeded to the throne and took up residence in the main Schloss. With the end of the monarchy the property was taken over by the state.