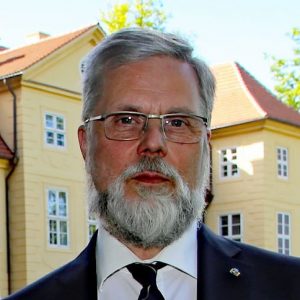 Duke Borwin was born on 10 June 1956 in Freiburg-im-breisgau. He is the youngest child and only son of Duke Georg Alexander and Duchess Ilona.

Duke Borwin was christened into the Roman Catholic Church receiving the names Georg Borwin Friedrich Franz Carl Stephan Konrad Hubertus Maria. As is traditional for the eldest son of the family he received Georg as his first Christian name, his second name Borwin is an old Wendish name with a long connection with the House of Mecklenburg dating back to Prince Heinrich Borwin I of Mecklenburg, the grandson of the ancestor of the family, Niklot, Prince of the Obotrites. The name’s Friedrich Franz were given in honour of Hereditary Grand Duke Friedrich Franz of Mecklenburg-Schwerin who was among his godparents.

In 1963, Duke Borwin and his parents moved to Ireland. The family lived at Culleen House, near Mullingar in County Westmeath, which was owned by one of his uncle Hassan Sayed Kamil’s Swiss businesses. From 1964 Duke Borwin attended Headfort School near Kells in County Meath.

Duke Borwin and his family’s time in Ireland came to a sudden end in 1969 with the collapse his uncle’s Swiss businesses with his assets taken over and sold by the state. The family therefore had to return to West Germany where they resettled in Baden-Württemberg with Duke Borwin continuing his education at the Waldorf School in Freiburg until 1976.

After completing his schooling Duke Borwin would serve in the German Army where he achieved the rank of Captain of the German Federal Forces. In 1984 he began studying at the Geisenheim Grape Breeding Institute, graduating in 1987 with an engineer degree in viticulture and beverage technology.

Duke Borwin was married to Alice Wagner in Hinterzarten on 24 December 1985 in a civil ceremony, followed by a religious ceremony on 19 July 1986. The couple made their home in the Black Forest region of the state of Baden-Württemberg where they raised their three children together, Duchess Olga, born 1988, Hereditary Prince Alexander, born 1991 and Duke Michael, born 1994. Duke Borwin and his wife continue to live in the Black Forest region today.

Living in the Black Forest has enabled Duke Borwin to enjoy his outdoor interests like the environment, fishing and hunting; his other interests include art, culture and social issues. Duke Borwin is actively involved in his local community supporting children with special needs through the Friends Association of the Upper Black Forest Support Centre, where he was chairman for over 10 years; he is also an active member of his local hunting association.

During his early career Duke Borwin and his wife managed a hotel together between 1988 and 1995, afterwards he became a manager at a Swiss drinks company. Latterly he has pursued a career in sales for Germany’s largest hunting outfitter, Frankonia and for the Vogel Shooting Centre in Eschbach. He has also been a licensed weapons dealer since August 2015 following the completion of a course at the Weapons School in Suhl.

Head of the house

Duke Borwin, while not resident in Mecklenburg-Strelitz, maintains a close link to the state and attends various functions there throughout the year. In June 2016 he chose to celebrate his landmark 60th birthday in Neustrelitz with the celebrations being attended by family, friends and local politicians and dignitaries. Being directly descended from the Russian branch of the House of Mecklenburg-Strelitz, which was founded by Duke Borwin’s great-great grandfather Duke Georg upon his 1851 marriage to Grand Duchess Ekaterina Mikhailovna of Russia, he also retains ties to Russia having first visited the country in 1997.

After becoming head of the house Duke Borwin had to address the restitution process with the state of Mecklenburg-Vorpommern, which his father had begun after German reunification in 1990 with claims dating back to the period of Nazi rule. When the process was concluded in 2004 the Grand Ducal Family reclaimed some land and buildings in Remplin, the majority of which were in a poor condition, including the north wing of the Remplin Palace which was all that remained after the majority of it was destroyed by the Nazis in an arson attack in 1940. The Remplin Palace was sold by auction in March 2019.

Duke Borwin is a supporter of the Evangelical Lutheran Church in Jordan and the Holy Land (ELCJHL) and was a guest at the dedication of their baptismal site by the River Jordan in January 2014. He supported the 1998 republication, after a 54 year absence, of the famous genealogical directory the Almanach de Gotha and serves as member of its Comité de Patronage. Duke Borwin is also patron of the lineage society the Order of the Founders of North America 1492-1692 which he was admitted into due to his descent from King Felipe II, under whose reign Spain ruled and colonised parts of North America.