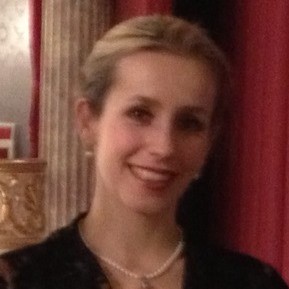 Duchess Olga was born on 13 October 1988 in Freiburg-im-breisgau. She is the eldest child of Duke Borwin and Duchess Alice.

Duchess Olga was christened into the Roman Catholic Church with the names Helene Olga Feodora Donata Maria Katharina Theresia. She grew up in the Black Forest region of Baden-Württemberg in southwest Germany where she attended the Birklehof School. She also spent some time studying in the Lake District in the United Kingdom.

After reaching the end of her secondary education Duchess Olga enrolled at Leipzig University in Germany where she studied international management. Being the first member of her generation to go to university she continued a tradition going back eight generations to her ancestor Duke Carl, the younger son of Duke Adolf Friedrich II, whereby a member of the House of Mecklenburg-Strelitz in every successive generation has attended university. Living and studying in the German state of Saxony, Duchess Olga became a member and spokeswoman of the Saxon Nobility Union which she was permitted to join due to her great grandmother being Princess Anna of Saxony.

After graduating from Leipzig in 2018, Duchess Olga returned to the Black Forest where she has began working for a local accountancy firm. When her work commitments permit Duchess Olga has made numerous visits to Mecklenburg where she has represented the Grand Ducal House at various events.