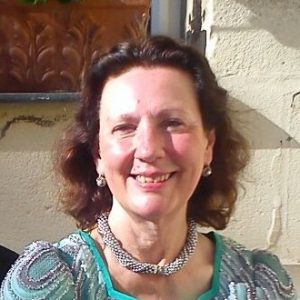 Her Highness Duchess Caroline Luise Irene Margarethe Helene Margareta Albertine Konrada of Mecklenburg, Princess of Wenden, Schwerin and Ratzeburg, Countess of Schwerin, Lady of the Lands of Rostock and Stargard was born on 18 April 1952 in Freiburg-im-breisgau. She is the youngest daughter of Duke Georg Alexander and his wife Duchess Ilona.

Duchess Irene grew up with her family in the West German state of Baden-Württemberg in the south of the country.

Duchess Irene was married to Constantin Harmsen in a civil wedding on 22 September 1979 in Mexico City. This was followed by a religious wedding on 26 July 1980 at the St. Leodegar Church in Biengen.

Duchess Irene and her husband have two sons together, Maximilian, born 1982 and Moritz, born 1985. Through their eldest son who married Countess Marianna von Westerholt and Gysenberg in 2008 they have five grandchildren, Paulina, born 2010, Jacobus, born 2011, Nicolaus, born 2014, Benedikt, born 2017 and Mathilda, born 2021.

Duchess Irene and her husband live in Frankfurt am Main.