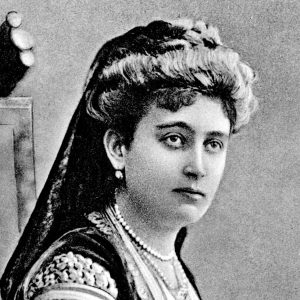 The granddaughter of two reigning sovereigns in the Grand Duke of Mecklenburg-Strelitz and the Duke of Anhalt, and with close family ties to other reigning families in Britain and Germany from an early age Jutta and her siblings would accompany their parents on visits to their relatives. However these visits aside Jutta and her elder sister Marie had limited contact with their parents as growing up in the strict and rigid surroundings of the Hereditary Grand Ducal Palace in Neustrelitz, the sisters were entrusted into the care of governesses.

In the spring of 1896 with Jutta and Marie now in their late teens their British grandmother, the Grand Duchess Augusta, decided to take the sisters with her during one of her regular trips to her native England. During their trip the Grand Duchess introduced her granddaughters to London society and took them to visit a number of sights around London such as the Tower of London, the Victoria and Albert Museum, the theatre and the opera. However unfortunately for the sisters during the trip they both contracted the measles which forced them to miss the famous Derby and Ascot races. .

Jutta spent the winter season of 1898 at the Imperial Court in Russia where she was chaperoned by her cousin Duchess Helene of Mecklenburg, a member of the Russian branch of the House of Mecklenburg-Strelitz. During her stay in the country Jutta met Danilo, the Hereditary Prince of Montenegro. The Montenegrin heir apparent was a relative of the Russian Imperial Family his sisters Militza and Anastasia being married to Grand Duke Peter of Russia and the Duke of Leuchtenberg respectively. Jutta’s stay in the country gave rise to rumours of a possible engagement to a Romanov Grand Duke. The rumour proved partially correct as having sought and received the consent of her grandfather Grand Duke Friedrich Wilhelm on 20 April 1899 the engagement of Jutta was officially announced. However it was not a Grand Duke who she would marry, instead she was to become the consort of a future sovereign in form of the Hereditary Prince Danilo of Montenegro, heir apparent to his father’s Balkan principality. There was a nine year age gap between the 19 year old Jutta and her 27 year old fiancé.

With Jutta a Lutheran and Prince Danilo and the people of Montenegro Orthodox Christian’s, Prince Danilo requested that Jutta adopt his and his countrymen’s Eastern Orthodox faith. As her father raised no objection Jutta agreed to adopt her husband’s faith. Prince Danilo then arranged for the Provost Malzeff, a priest at the Russian embassy in Berlin, to give Jutta religious instruction in Orthodox Christianity. In Mecklenburg the decision of Jutta to change her religion proved to be controversial among the country’s Lutherans who were proud of the example that had been set by another Mecklenburg duchess, Marie of Mecklenburg-Schwerin, who had originally kept her Lutheran faith when she married Grand Duke Vladimir Alexandrovich of Russia who like Prince Danilo belonged to the Orthodox faith. However Jutta, unlike Marie of Mecklenburg-Schwerin, was someday expected to become consort to a reigning monarch. .

Although the location and date had been set the marriage almost never took place due to a disagreement over who would receive the money that Jutta would bring to the marriage. Her family insisted that only the bridegroom would have access to the money, and even then he would only be able to draw on the interest generated. Prince Danilo’s father Prince Nikola was unhappy with this arrangement as he had hoped to receive the money himself. As such he spread a false rumour that his son was gravely ill and that the marriage may have to be called off. With negotiations between the two families ongoing and a postponement possible Jutta was also reported as ill. With all this going on Prince Danilo was busy making his manor house near Antivari ready for his future wife. As such he was unaware of his own supposed illness and the ongoing discussions between Montenegro and Mecklenburg-Strelitz. When he read of his fiancées illness in a newspaper he went to see his father to tell him that he would immediately go to be with her. With Prince Danilo on his way to Neustrelitz his father telegraphed ahead that he would accept the Mecklenburg-Strelitz terms and that the marriage would go ahead. In order to cover for Prince Danilo’s previously reported grave illness and to explain his supposed recovery a report was released stating that he had undergone a successful operation. In addition to her own family’s money the Russian Emperor Nicholas II also gave Jutta a dowry of 2,000,000 Roubles.

After an emotional send off in Neustrelitz where she said her goodbyes to her father who was unable to attend the wedding due to illness, Jutta, accompanied by her mother and brother Adolf Friedrich, set off for her wedding. They arrived in the Montenegrin coastal town of Antivari at 9pm on 25 July two days before the wedding was to take place. At 10 am the following morning Jutta went to a specially consecrated private house in the town where she was received into the Orthodox faith taking the name Militza. As her mother and brother did not wish to witness her conversion Jutta was accompanied by Grand Duke Konstantin Konstantinovich of Russia. For the wedding Militza, as she was now known, wore her new country’s national costume. She married Prince Danilo at 5pm on 27 July, the wedding being declared a national holiday in Montenegro. Upon returning to Prince Danilo’s pavilion the newlywed couple appeared on the balcony before an enthusiastic population who had never witnessed a wedding on this scale before. The wedding festivities included a firework display, the illumination of the town and surrounding hills, a torchlight procession and a military tattoo.

After the uncertainty over whether the wedding would even take place, once wed Militza tried to make herself popular among her husband’s future subjects. Outside of the country Prince Danilo and Militza often represented the Montenegrin Royal Family at royal events in Europe. They were the only members of a foreign reigning house to attend the 1904 coronation of their brother in law King Petar Karadjordjevic of Serbia, the new king having come to the throne the previous year on the regicide of King Aleksander Obrenovic.

At the time of her marriage Montenegro was only a principality. As such there was no reason to assume that Militza would follow in the footsteps of Queen Charlotte of Great Britain, Queen Luise of Prussia and Queen Friederike of Hanover and become the fourth Strelitz princesses to become a queen consort. However in 1910 the situation changed with Militza’s father in law Prince Nikola declaring Montenegro a kingdom. As a result Militza saw her status increase from being Her Highness the Hereditary Princess of Montenegro to Her Royal Highness the Crown Princess of Montenegro. One of the couples early official trips abroad following the increase in status was to the coronation in 1911 of the new British king, George V.

Domestically the establishment of the kingdom saw Montenegro became engulfed in various wars. In 1912 during the First Balkan War with the country facing a shortage of doctors Militza personally took charge of the task of directing treatment for the wounded at the provisional hospitals. When the First World War broke out a couple of years later Militza and her husband narrowly escaped death in assassination attempt when an Austrian pilot tried to drop a bomb on the couple as they landed in Antivari having just disembarked from a French warship. The Austrians continued to target the couple bombing their villa in Antivari with the attack blinding one of Militza’s maids of honour.

Against the superior strength of the Central powers Militza and the rest of the Royal Family were eventually forced to leave Montenegro for exile in France where King Nikola formed a government in exile. With victory for the allies the Serbians on 13 November 1918 announced the annexation of Montenegro, incorporating it into the new Kingdom of the Serbs, Croats and Slovenes (later Yugoslavia). King Nikola and his government-in-exile refused to recognise the annexation and retained some international recognition. With the death of her father in law on 1 March 1921, Militza and her husband were proclaimed King and Queen of Montenegro. However one week later the new King Danilo announced his abdication on the grounds that as he had abstained from taking an active part in the war, and on account of his marriage to Militza, a German by birth, he was a persona non grata to the Allies and as such not the right person to represent Montenegro’s cause. As Danilo and Militza’s marriage was childless their nephew Mihajlo became the new king under the regency of the Dowager Queen Milena, the widow of King Nikola. On 13 July 1922 the Conference of Ambassadors at Paris gave international recognition to the annexation of Montenegro effectively ending the Royal Family’s hopes of returning. .

With the monarchy in both the country of her birth and the country of her husband coming to an end, Militza, refusing to recognise the Grand Ducal Family’s settlement when they lost the throne, began legal proceedings against the new republican Free State of Mecklenburg-Strelitz in 1926, seeking her full inheritance of 14,500,000 Marks ($3,750,000), which amounted to one quarter of her late brother Grand Duke Adolf Friedrich’s estate. As a citizen of one of the allied states she controversially based her claim on clauses in the treaty of Versailles. With Montenegro no more and Jutta now possessing Yugoslavian citizenship her claim was heard by a joint Yugoslav-German arbitration court. Her claim was ongoing for a few years with the Mecklenburg-Strelitz government in 1928 appealing, sending the case to the arbitration court in Paris. It was not until 1931 that the case was settled when the State Supreme Court reversed a lower court judgment and ordered Mecklenburg-Strelitz to pay Militza $125,000, her mother $250,000 and her sister Marie $42,500, plus 8% interest from 15 July 1925.

With her claims now settled Militza lived quietly in the South of France, still occasionally appearing in public at family weddings and funerals. She was widowed on 24 September 1939 with the death of her husband ex-King Danilo in Vienna. Militza left her home in France during the Second World War settling in Rome where she lived for the remainder of the war. On 17 February 1946, a month after her 66th birthday, Queen Militza of Montenegro died in Rome. She is buried in the Cimitero acattolico (Non-Catholic Cemetery) in Rome.