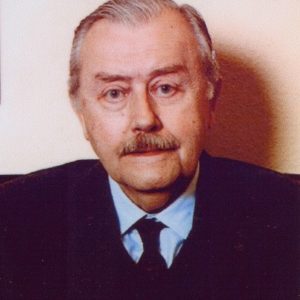 Duke Carl Gregor, MA, PhD was born 14 March 1933 at Remplin Palace in Mecklenburg. He was the youngest child of Duke Georg and his first wife Duchess Irina.

Duke Carl Gregor holds the distinction of being the last member of the grand ducal house (both branches) to have been born in Mecklenburg. His birth was also the first in the House of Mecklenburg-Strelitz in nearly fifty years, the last being Duke Carl Borwin in 1888, as his father and siblings all acquired membership of the house after their births.

Duke Carl Gregor was christened into the Roman Catholic Church in the Remplin Palace’s Chapel by the Bishop of Danzig, Count Eduard O’Rourke, receiving the names Carl Gregor Georg Friedrich Franz Heinrich Norbert Wenceslaus Johann Nepomuk Lazarus Clemens Maria de Mercede et omnes sancti. As has been traditional for the second son of the family he received Carl as his first Christian name. His godparents were his grandmother Maria Raievskya, his great uncle Duke Carl Michael, his cousin Princess Elisabeth of Lippe, Grand Duke Friedrich Franz IV of Mecklenburg-Schwerin, Prince Heinrich of the Netherlands and Duchess Marie Antoinette of Mecklenburg-Schwerin.

Duke Carl Gregor spent his early years in Mecklenburg with his family at their home Remplin Palace. The Nazis who came to power in Germany around the time of Duke Carl Gregor’s birth viewed the grand ducal family with suspicion and began to subject them to persecution due to their recent ties to Russia and membership of the former ruling class. The Nazi persecution reached new levels during the Second World War when on the night of 10 to 11 April 1940 the family home Remplin Palace was largely destroyed in an arson attack instigated by the local Nazi Gauleiter, Friedrich Hildebrandt. Duke Carl Gregor retained vivid memories from the night. With his home in flames he knelt before the burning building and prayed for it to be spared, he also recalled seeing his elder brother Duke Georg Alexander using an axe to remove the family Coat of Arms from the front door in order to save it from the fire.

Following the fire in what was hoped to be a temporary move the 7 year old Duke Carl Gregor and his family had to leave Mecklenburg moving into a villa located at 4 Nikischstrasse in the Grunewald quarter of Berlin. At their Berlin home Duke Carl Gregor and his siblings, along with their English governesses and French tutors, would attend the regular lunches hosted by their parents where ambassadors, generals and royalty were among the frequent guests.

In February 1944 the grand ducal family lost their second home in the space of four years as their villa was destroyed in an Allied bombing raid. Later on that year Duke Carl Gregor’s father was arrested and interned by the Gestapo. With his father’s release in February 1945, the following month the family was reunited in Sigmaringen having been invited to the city by the Princess of Hohenzollern (born Princess Margarete of Saxony), Duke Carl Gregor’s father having been a close friend of the Princess’s late brother Georg, a Catholic priest and the former Crown Prince of Saxony.

In the post war period with Germany partitioned into east and west a return to Mecklenburg, now in the communist East Germany, became impossible. As such Duke Carl Gregor and his family made their home in the Prinzessinnen-Palais, a Hohenzollern family residence located at 9 Karlstrasse in Sigmaringen.

Duke Carl Gregor was married to Princess Maria Margarethe of Hohenzollern in a civil ceremony on 18 December 1965 in Hechingen, followed by a religious ceremony on 23 April 1966 in the chapel of Burg Hohenzollern, the ancestral home of his wife’s family. The newlywed couple had known each other for many years as it had been his wife’s aunt who had invited the grand ducal family to Sigmaringen in 1945. Princess Maria Margarethe was also a first cousin of Archduchess Ilona of Austria who was married to Duke Carl Gregor’s brother Duke Georg Alexander.

Following Duke Carl Gregor’s and Princess Maria Margarethe’s marriage the couple lived together at Villa Silberburg in Hechingen until her death in 2006. They had no children. After German reunification Duke Carl Gregor gained the chance to visit Mecklenburg and his old family home in Remplin although a permanent return was ruled out due to his age and connections in Southern Germany where he has lived the majority of his life.

Duke Carl Gregor received his early education at Gymnasium schools in Berlin and Sigmaringen before starting three years study of music at the Private Zimmerman Conservatory in Konstanz in 1954. In 1960 he enrolled at the University of Tübingen where he studied art history, musicology and the Auxiliary sciences of history, graduating in 1964 with a Magister Artium (Master of Arts) degree.

After graduation Duke Carl Gregor spent a year working as assistant to the Professor of Art at the University of Stuttgart. Four years after gaining his Masters degree Duke Carl Gregor received his PhD also from the University of Tübingen, thus making it four successive generations where a member of the grand ducal house has gained a doctorate. The tradition, starting with Grand Duke Friedrich Wilhelm a Doctor of Civil Law, continued through Duke Carl Gregor’s grandfather and great uncle the Duke’s Georg Alexander and Carl Michael, both Doctor’s of Philosophy, and his father a Doctor of Economics and Social Sciences.

With his interest and educational background in art history from 1971 to 1974 Duke Carl Gregor worked at the State Office for the Preservation of Historical Monuments in Tübingen before going on to become director of the Diocese museum in Rottenburg am Nekar, a post he held until his retirement in 1992.

Through the influence of his parents Duke Carl Gregor developed an interest in jazz music, art, history and painting. This interest was evident from an early age as while a young boy living in wartime Berlin he would attend art auctions to bid on antique clocks and Chinese porcelain.

In the post war period the young Duke Carl Gregor would transform one of the rooms at his family’s home in Sigmaringen into a rehearsal area in order to hone his drumming skills. In the house there was also a large collection of jazz records which Duke Carl Gregor and fellow young musicians would spend hours listening to, culminating in the creation in 1954 of the band “J.C. Amateurs” (“JC” standing for Jazz Club Sigmaringen) which was the first jazz band in Upper Swabia.

Duke Carl Gregor was the author of a number of books on topics such as jazz music and art history. He was also a noted portrait and landscape painter whose work in his later years was exhibited in Sigmaringen in 2003 and Hechingen in 2008.

Duke Carl Gregor died at his home Villa Silberburg on 23 July 2018 at the age of 85. He is the longest lived member by birth of the House of Mecklenburg-Strelitz.