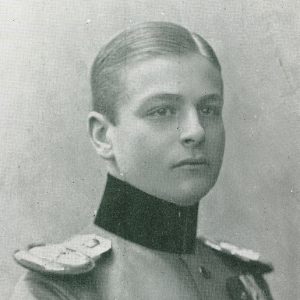 Duke Carl Borwin was christened into the Lutheran Church at the Neustrelitz Palace on 15 November 1888 receiving the names Carl Borwin Christian Alexander Arthur. His godparents were the Empress Maria Feodorovna of Russia, King Christian IX of Denmark, Prince Arthur and Princess Margaret the Duke and Duchess of Connaught, the future King Wilhelm II of Württemberg, the Prince Karl Günther of Schwarzburg-Sondershausen and his mother’s brother and sister Prince Aribert and Princess Alexandra of Anhalt.

Duke Carl Borwin grew up in the Carolinenpalais in Neustrelitz, the official residence of the Hereditary Grand Ducal Family. For his education he received instruction from private tutors and attended the public school on Tiergarten Street in Neustrelitz before a move to Dresden at the turn of century to attend the Vitzthumschen School.

With the death of his grandfather Grand Duke Friedrich Wilhelm in 1904 Duke Carl Borwin inherited 600,000 marks, with a further 30,000 marks to be inherited upon his 25th birthday. After completing his final school exams in 1905 he spent some time travelling around Southern Europe visiting the kingdoms of Italy and Greece as well as Constantinople, capital of the Ottoman Empire.

In October 1905 Duke Carl Borwin began a career in the Royal Prussian Army, being appointed a Lieutenant a la suite of the 24th Holstein Field Artillery Regiment which was based in Mecklenburg.

In 1906 the young Duke Carl Borwin’s name appeared in relation to the succession to the duchy of Brunswick following the death of Prince Albert of Prussia, regent from 1885 until his death. The legitimate heir the Duke of Cumberland, the ex-Crown Prince Ernst August of Hanover, had been denied the throne since his kinsman Duke Wilhelm’s death in 1884 due to his refusal to renounce his claim to the Kingdom of Hanover which had been annexed by Prussia in 1866.

With the regency having lasted over two decades and there being a desire for a final solution to the succession, inaccurate reports surfaced of Duke Carl Borwin possibly being selected as the new duke of Brunswick. The basis of this was his female line claim to the succession through his British grandmother the Dowager Grand Duchess Augusta who was a member of the House of Hanover.

In fact the grand ducal family had always been close to their deposed Hanoverian cousins with Duke Carl Borwin’s late grandfather Grand Duke Friedrich Wilhelm having been a staunch supporter. In January 1907 Duke Carl Borwin even represented the grand ducal family at the funeral of the Duke of Cumberland’s mother Queen Marie of Hanover. In June of that year Duke Johann Albrecht of Mecklenburg-Schwerin was announced as the new regent of Brunswick.

In July 1908 Duke Carl Borwin arrived in the German province of Alsace-Lorraine to study at the local military school in Metz. A month later on 24 August 1908 he unexpectedly died with the official cause being announced as heart failure.

Rumours however surfaced that his death was related to his sister Duchess Marie and that he either committed suicide after a drunken Army ensign made despairing remarks regarding a scandal involving his sister, or that he was killed, defending his sister’s honour, in a duel with her estranged husband Count Georges Jametel. The actions of the grand ducal court fuelled the rumours of an unnatural death as his body was taken direct to Mirow where he received a low key funeral with only his father and brother from his immediate family present.