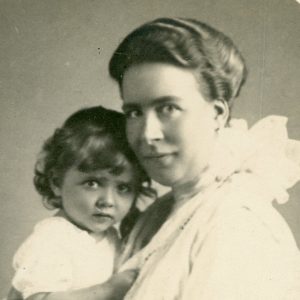 Duchess Marie was christened into the Lutheran Church at the Carolinenpalais in Neustrelitz on 2 June 1878 receiving the names Victoria Marie Auguste Luise Antoinette Karoline Leopoldine. It was at the Carolinenpalais, the official residence of the Hereditary Grand Ducal Family, that Duchess Marie would spend her childhood and where she and her younger sister Duchess Jutta were largely under the care of their governesses for their education and upbringing.

Growing up Duchess Marie would make regular visits to her maternal relations in Anhalt or at their villa in the Bavarian Alps. She would also visit Dresden to stay with her paternal grandmother Grand Duchess Augusta at her summer residence the Kepp Palace. In 1896 Duchess Marie and her sister Duchess Jutta paid a two month visit with their British grandmother Grand Duchess Augusta to the United Kingdom. During the visit they met with Queen Victoria and their other relations in the Royal Family and had the chance to visit a number of cultural sites and attractions in the capital London.

Having had a very sheltered upbringing at the hands of her governesses at home in Neustrelitz,  in her late teenage years Duchess Marie became pregnant after being taken advantage of by Heinrich Hecht, a married footman in the employment of the Hereditary Grand Ducal Family. Dismissed from service without a reference and unable to gain further employment, Hecht was eventually pensioned off in an attempt to defuse the growing scandal caused by his releasing of the story to the press. Although the incident caused great distress to Duchess Marie’s parents, throughout the ordeal she was supported by her grandmother Grand Duchess Augusta.

Duchess Marie’s child is believed to have been born in November 1897 in Paris and christened Paul Andree, going on to be initially cared for by a French couple before Duchess Marie’s cousin from the Russian branch of the family, Duchess Helene, arranged for a Russian family to adopt him at the turn of the century who in turn renamed him. In April 1898 Duchess Marie and her grandmother Grand Duchess Augusta left Paris for London.

During her stay in France,  Duchess Marie would meet Count Georges Jametel, a member of the Papal nobility. After the couple’s engagement was announced on 1 June 1899 it was decided that, for reasons of etiquette due to the morganatic nature of the marriage, the wedding ceremony would be held in London rather than Neustrelitz.

The wedding took place on 22 June with the couple marrying in a Roman Catholic ceremony at St Elizabeth’s Church in Richmond, followed by an Anglican ceremony at St Anne’s Church in Kew. The wedding breakfast was held by Duchess Marie’s great uncle the Duke of Cambridge at his residence Cambridge Cottage in Kew after which the couple left London for their honeymoon in mainland Europe.

Following their honeymoon Duchess Marie, now styled Countess Jametel, and her husband took up residence in Villa Marie in the Faubourg Saint Germain district of Paris living of the interest of the dowry her father provided her with. With the death of her grandfather Grand Duke Friedrich Wilhelm in 1904 she inherited a further 300,000 marks. Together Duchess Marie and her husband had two children together a son, Georges, born 1904 and a daughter Marie Auguste, born 1905.

Although living in Paris, Duchess Marie retained contact with her family in Mecklenburg and would travel to visit them in Neustrelitz or meet them in Paris during their trips to the French capital.  Ultimately the marriage would prove to be an unhappy one and the couple separated in 1908 with the death of Duchess Marie’s brother Duke Carl Borwin in August 1908 rumoured to have been the result of injuries sustained in a duel with her husband while defending his sister’s honour.

After the separation Duchess Marie took up residence in a villa in Dresden-Blasewitz brought for her by her father.  The marriage was formally dissolved on 31 December 1908 on the grounds of her husband’s infidelity. Following the divorce Duchess Marie resumed her maiden title of Duchess of Mecklenburg and acquired custody of her daughter Marie Auguste who in 1910 was created Countess of Nemerow by her father Grand Duke Adolf Friedrich V. Her son Georges remained with his father.

On 29 April 1914 Duchess Marie became engaged to Prince Julius Ernst of Lippe after the consent of her father Grand Duke Adolf Friedrich V and her fiancée’s brother the reigning Prince Leopold IV of Lippe had been given. Tragically this would be one of her father’s last acts as Grand Duke before his death on 11 June 1914.

Duchess Marie and Prince Julius Ernst were married on 11 August 1914 in Neustrelitz shortly after the outbreak of the First World War. This was the first wedding by a member of the Grand Ducal Family to have taken place in Neustrelitz since that of Duchess Marie’s great aunt Duchess Caroline to the then Crown Prince (later King Frederik VII) of Denmark over 70 years before.

Duchess Marie spent the war years with her husband at their villa in Dresden-Blasewitz where the couple’s two children were born, Princess Elisabeth Caroline in 1916 and Prince Ernst August in 1917. Following the end of the war in November 1918, both Duchess Marie and her husband’s families were dethroned with the remainder of the monarchies in Germany.

After the war the couple continued to live at their villa in Dresden-Blasewitz, while also using the Waldsee Hunting Palace in Mecklenburg-Strelitz which Duchess Marie had inherited from her brother Grand Duke Adolf Friedrich VI following his death in February 1918. As leading members of the former reigning family, after the end of the monarchy Duchess Marie, her mother Grand Duchess Elisabeth and sister Jutta, styled Princess Militza of Montenegro following her marriage, were tasked with settling compensation claims against the new republican government in Mecklenburg-Strelitz.

In 1930 her husband renovated his family seat in Oberkassel, Bonn and the family began to split their time between their two properties, spending the summer in Oberkassel and the winter in Dresden. In January 1937 Duchess Marie and her husband travelled to the Netherlands to attend the wedding of their nephew Prince Bernhard of Lippe-Biesterfeld to Princess Juliana of the Netherlands, the daughter of Queen Wilhelmina and heir to the throne, with her husband Prince Julius Ernst serving as a witness for his nephew.

Duchess Marie and Prince Julius Ernst celebrated their silver wedding anniversary on 11 August 1939 just a month before the Second World War broke out. Following the end of the conflict in 1945 Duchess Marie lost her Dresden property, which falling in communist East Germany was confiscated by the Red Army, with the family being forced to settle permanently in Oberkassel.

It was in Oberkassel that Duchess Marie died on 14 October 1948 aged 70, being buried in the Lippe family crypt at Heisterbach Abbey near Oberkassel. She was survived by her husband Prince Julius Ernst who died on 15 September 1952.