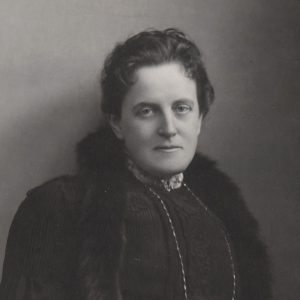 Duchess Helene was born on 16 January 1857 in St Petersburg. She was the daughter of Duke Georg and Duchess Ekaterina.

Duchess Helene was christened a member of the Lutheran Church in St Petersburg on 16 February 1857 receiving the names Helene Marie Alexandra Elisabeth Auguste Katharine. In Russia however she would always be known by the Russian form of her name, Elena Georgievna.

Duchess Helene grew up in the Russian Empire at the Mikhailovsky Palace in St Petersburg and the Oranienbaum Palace on the Gulf of Finland. Although Duchess Helene received a Russian upbringing her paternal roots were not forgotten and from an early age she would accompany her parents on visits to their family in Mecklenburg, with her parents owning the Remplin Palace in the state. Aged just 2 during one such visit, she took part in the public 80th birthday celebrations in Neustrelitz for her grandfather Grand Duke Georg.

After finishing her education Duchess Helene became heavily involved in charitable and philanthropic activities in Russia. At the age 21 she became a member of the Women’s Patriotic Society, starting out as an assistant trustee of their Moscow School before going on to gain election to the board of the Society. In 1886 she became a board member and trustee of the Duke Peter of Oldenburg Memorial School where through her artistic interests she introduced a craft’s class, she later also became a trustee of the Poorhouse in Oranienbaum set up in memory of Emperor Aleksandr II. Outside of Russia as a member of the Saint Prince Vladimir Brotherhood she was active in the establishment of Orthodox churches in Germany and a Russian cemetery in Berlin.

Duchess Helene and her family belonged to the most junior branch of the Russian Imperial Family descending from her grandfather Grand Duke Mikhail Pavlovich of Russia, the youngest son of Emperor Pavel. Within the ruling Romanov dynasty Duchess Helene’s family and those of the Oldenburg’s and Leuchtenberg’s were termed ‘half sovereigns’ due to their lack of the Imperial Russian Grand Ducal title. Despite not formally belonging to the imperial family, Duchess Helene was close to her Romanov cousins and attended all important state events such as the coronation of Emperor Aleksandr III in 1883.

A wealthy heiress through her mother, who herself was the sole heiress of her parents Grand Duke Mikhail Pavlovich and Grand Duchess Elena Pavlova, in her youth Duchess Helene was seen as an attractive potential match for Prince Arthur, Duke of Connaught and the reigning Prince Alexander of Bulgaria by their royal mothers. No betrothal however would take place until October 1891 when in Cernobbio, Italy, Duchess Helene became engaged to Prince Albert of Saxe-Altenburg, the widower of Princess Marie of Prussia and a former Major General in the Imperial Russian Army. Prince Albert was also a brother of Duchess Antoniette of Anhalt, the mother of Hereditary Grand Duchess Elisabeth.

The wedding of Duchess Helene and Prince Albert took place on 13 December 1891 at her family’s Mecklenburg estate in the village of Remplin. Aside from the Grand Ducal Family, the ceremony was also attended by her husband’s family, the Ducal Family of Saxe-Altenburg including his cousin the reigning Duke Ernst I, and the German Emperor Wilhelm II. Although she would remain childless herself, through marriage Duchess Helene became the stepmother of Prince Albert’s two young daughters Princess Olga Elisabeth, born 1886, and Princess Maria, born 1888.

Following the wedding Princess Helene of Saxe-Altenburg, as she now was, Prince Albert and their daughters divided their time between his estate in Mecklenburg, the Serrhan Palace, and her Russian residences, the Chinese Palace at Oranienbaum and the Kamenny Island Palace in St Petersburg. In society Princess Helene and Prince Albert became well known for their art collecting.

During her marriage and in her widowhood Princess Helene continued with her charitable and philanthropic activities. In 1900 she became a founding member of the Russian Society for the Protection of Women which had been established to combat prostitution and the exploitation of women. Princess Helene would herself personally fund the society’s Department of Prevention whose projects included the building of dormitories to provide affordable shelter for vulnerable women.

Aside from her charity work, music was another great passion for Princess Helene who herself was a talented singer. In 1903 she personally paid for the works of the famous German composer and musician Johann Sebastian Bach to be translated into Russian. Later in 1909 she was appointed President of the Imperial Russian Musical Society which had been established in 1859 under the presidency of her grandmother Grand Duchess Elena Pavlova. As President she established a scholarship scheme to enable talented Russian musicians to take part in competitions abroad, she also turned her Kamenny Island Palace into a centre for musical culture and would host evening concerts there which she would often sing in herself.

During times of war Princess Helene was active in relief efforts. During the Russo-Japanese War of 1904-1905 she turned her Kamenny Island Palace over to the Russian Red Cross, she was also involved in supplying clothes for the soldiers serving in the Far East by funding the purchase of fabrics then personally overseeing the manufacturing and dispatch of the clothing. After the war she continued to support soldiers and their families through donations.

During the war Princess Helene remained in Russia where she had acquired citizenship shortly after war was declared. She was again active in relief efforts by supporting the Russian Red Cross, opening a hospital at her Kamenny Island Palace and organising fund raising charity bazaars and concerts. Princess Helene was separated from her two German based daughters for the duration of the war with their husbands both serving in the Royal Prussian Army.

In 1917 revolution broke out in Russia with the abdication of her cousin Emperor Nikolai II in February resulting in the abolition of the monarchy. With the situation in Russia deteriorating even further following the Bolshevik takeover that October, for their own safety Princess Helene and other family members gathered in Kislovodsk in the safer southern Caucasus region of Russia, with her private property and assets soon all being expropriated by the Bolsheviks.

In 1919 following the Bolshevik’s success in the Russian Civil War, Princess Helene and her family would all leave Russia under the protection of Great Britain. In exile Princess Helene and her brother Duke Carl Michael took up residence in Denmark’s capital Copenhagen where a large Russian émigré community had settled including their Romanov relatives the Dowager Empress Marie Feodorovna and her youngest child Grand Duchess Olga Alexandrovna.

After the death of the Dowager Empress in October 1928, over the next couple of years Princess Helene and her brother would both leave Denmark. In 1930 Duke Carl Michael moved to the Remplin Palace while Princess Helene made her home in Paris where she became professor of music at the Conservatoire Rachmaninoff and chair of the newly founded Russian Musical Society Abroad.

Princess Helene died at the age of 79 on 26 August 1936 while at the Remplin Palace. She was laid to rest in the Remplin cemetery alongside her brother Duke Carl Michael. As it was her wish to be buried in Oranienbaum, following the fall of the Soviet Union discussions have begun to take place on the possibility of her remains being reburied there.