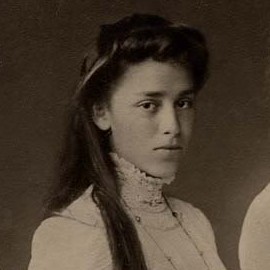 Countess Marie was born on 1 November 1893 in Oranienbaum, Russia. She was the second child of Duke Georg Alexander and his wife Countess Natalia Fedorovna of Carlow.

Countess Marie was christened into the Lutheran Church with the names Marie Katharine Sophie. As her parents had not sought dynastic recognition for their marriage, Countess Marie derived her status and title from her mother who had been created Countess of Carlow on 18 March 1890 by her father’s uncle Grand Duke Friedrich Wilhelm.

Countess Marie, or Mariya Georgievna which was the Russian form of her name, and her three siblings, Catherine, Natalia and Georg grew up in Imperial Russia at their family’s vast palace and estate at Oranienbaum on the Gulf of Finland, and at their St Petersburg river embankment mansion 46 Fontanka. In 1909 her family life was shattered with the sudden and unexpected death of her father Duke Georg Alexander. As she and her siblings had not yet reached the age of majority their uncle Duke Carl Michael was appointed their legal guardian by Grand Duke Adolf Friedrich V.

Since the marriage of her grandparents Duke Georg and Grand Duchess Ekaterina Mikhailovna of Russia in 1851, Countess Marie’s family had been closely related to the Russian Imperial Family and at the imperial court Countess Marie would serve as a Maid of Honour to the Empress of Russia.

Following the outbreak of the First World War in 1914, Countess Marie spent the first years of the war supporting the Russian war effort from Oranienbaum where she produced bandages and bedclothes in sewing workshops and worked in Red Cross depots. She also trained as a nurse.

Just a few months after her wedding the Russian Emperor Nikolai II abdicated. With the abolition of the monarchy the internal situation in Russia rapidly deteriorated with the country descending into a civil war between the Bolsheviks and the anti-communist White Army. Amidst the turmoil Princess Marie and her family sought refuge in Kislovodsk in the White Army occupied Caucasus region of Russia. It was here in Kislovodsk that in November 1917 her first child, Prince Dmitri, was born.

Princess Marie gave birth to her second child, Princess Natalia, in January 1920 in Yalta. Later that year and not knowing if her husband who had been serving with the White Army was still alive, she escaped from the Crimea aboard a British Royal Navy ship with her two children. In exile Princess Marie initially settled in Cannes, France with her mother who died there on 14 March 1921. While living in France she also learned that her husband Prince Boris had been killed in June 1919 fighting the Bolsheviks at Tsaritsyn.

Having spent her first years of life outside Russia in France, in the mid 1920s Princess Marie moved with her children to London where she was closer to her sister Catherine who was living in Surrey with her family. In London on 14 June 1929, the widowed Princess Marie married Count Vladimir Petrovich Kleinmichel. The couple’s daughter Countess Sophie was born in London the following year.

During the 1930s Countess Marie made regular visits to her brother Duke Georg and his family in Germany. During these visits she would learn firsthand of the horrors of Nazism which she reported back to London’s Russian community. Just as she had in the First World War, during World War II Countess Marie again showed her humanitarian nature by supporting and visiting in prison Italian waiters from Soho who, although in some cases had emigrated to Britain many years ago, had been arrested under British Defence Regulations for being nationals of a enemy state.

During the war Countess Marie suffered a double personal tragedy. In October 1940 her elder sister Catherine was killed in a German bombing raid over London. Four years later her only son Prince Dmitri, a Captain in the British Army, was killed during the battle for the Maas bridges in the Netherlands.

In London Countess Marie was a prominent member of the Russian community both before and after the Second World War. She was close to her Romanov cousins also living in the country, with her husband Count Vladimir serving as advisor to Grand Duchess Xenia, sister of Emperor Nikolai II. She and her husband were also active members of the London parish of the Russian Orthodox Church Outside Russia, with Countess Marie serving as Parton of the church’s Sisterhood of Saint Xenia. She also dedicated herself to supporting the activities of the British based Russian Red Cross.

Countess Marie died on 5 September 1979 in London aged 85, being buried there at Gunnersbury Cemetery. She was survived by her husband Count Vladimir who was interred alongside her following his death on 17 May 1982.