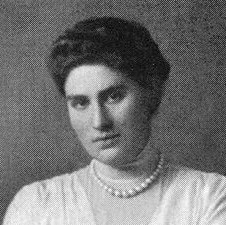 Countess Catherine of Carlow was born on 25 July 1891 in Oranienbaum. She was the eldest child of Duke Georg Alexander and his wife Countess Natalia Fedorovna of Carlow.

Countess Catherine was christened into the Lutheran Church with the names Catherine Helene. As her parent’s marriage was without dynastic recognition, Countess Catherine derived her status and title from her mother who had been created Countess of Carlow by Grand Duke Friedrich Wilhelm on 18 March 1890.

Countess Catherine, or Ekaterina Georgievna which was the Russian form of her name, enjoyed an idyllic childhood in late Imperial Russia at her family’s vast palace and estate at Oranienbaum, located on the Gulf of Finland, and at their St Petersburg river embankment mansion 46 Fontanka. As the granddaughter of Grand Duchess Ekaterina Mikhailovna of Russia, Countess Catherine belonged to the most junior branch of the Russian Imperial Family descending from her great-grandfather Grand Duke Mikhail Pavlovich of Russia, the youngest son of Emperor Pavel. As such Countess Catherine was closely related to the ruling Romanov dynasty and a member of the imperial court.

Through her father Countess Catherine inherited a passion for music and she was privileged to hear and meet numerous notable musicians at the private concerts laid on by him at their home. With the sudden and unexpected death of her father in 1909, as she had not yet reached the age of majority Countess Catherine’s uncle Duke Carl Michael was appointed her legal guardian by Grand Duke Adolf Friedrich V.

On 10 February 1913 at the Guards Corps Church in St Petersburg, Countess Catherine married Prince Vladimir Emanuelovich Galitzine. The couple who met at her family’s home 46 Fontanka, spent the first three weeks of their honeymoon at Oranienbaum before continuing onto Europe. Princess Catherine Galtizine, as she was now styled, adopted her husband’s Russian Orthodox faith following the marriage and in December 1913 the couple welcomed their first son, Prince Nikolai.

During the First World War Princess Catherine’s husband, a Captain in the Imperial Russian Army, served as aide-de-camp to Grand Duke Nikolai Nikolaevich of Russia, the Commander in Chief of the Russian Armies. From Oranienbaum Princess Catherine herself contributed to the war effort by producing bandages and bedclothes in sewing workshops and working in the Red Cross depots. In October 1914 she also opened a hospital for recovering officers at her family’s Fontanka mansion in St Petersburg which she ran until May 1915 when she joined her husband in Tiflis (now Tbilisi) in the Georgian Governorate of the Russian Empire. It was here in April 1916 the couple welcomed their second son Prince Georgii.

In 1917 with the abdication of Emperor Nikolai II and the abolition of the monarchy, the internal situation in Russia rapidly deteriorated as the country descended into a civil war fought between the Boleshviks and the anti-communist White Army. Princess Catherine and her family sought refuge in Kislovodsk in the White Army occupied Caucasus region of Russia where they were joined by other family members. It was here in May 1918 that her youngest son, Prince Emanuel, was born.

With the Bolsheviks success in the Russian Civil War it soon became evident that Princess Catherine and her young family had no future in Russia, therefore faced with the encroaching Red terror they left the country in April 1919 aboard the British ship HMS Grafton. After a change of ships in Constantinople the family finally disembarked in Italy and proceeded to make their way through France, where her mother, sister and brother initially settled, to the United Kingdom where Princess Catherine and her husband had decided to make their home. Her sister and her children later joined them in Britain. In 1921 Princess Catherine and Prince Vladimir rented Chessington Hall in Surrey which became their home for the next 14 years and a gathering place for the exiled Russian community in Britain. To support his family Prince Vladimir initially tried his hand at chicken and turkey farming before opening a Russian art shop in Berkley Square, London.

In February 1933 having been in the country for over a decade Prince Vladimir applied to the Home Secretary for naturalisation as a British citizen. Two months later in April 1933, Prince Vladimir along with his three sons, received their certificates of naturalisation and made their oaths of allegiance. In 1935 the family left Chessington moving into a house at 131 Croxted Road in West Dulwich, London. In the capital Princess Catherine and her husband were prominent members of the Russian community and regulars on the London social scene. Princess Catherine was also actively engaged in charitable causes in support of the Russian Orthodox Church and the Russian Red Cross Society which provided support to Russian refugees living in Britain.

During the Second World War Princess Catherine was again involved in the war effort, this time working as a civil servant in the Postal Censorship Department in London. On 8 October 1940 she was seriously injured while on her way to work when the bus she was travelling in down the Gray’s Inn Road was hit by a bomb in a German raid. She died later that day at the Royal Free Hospital aged 49. Her funeral was held on 10 October at the Russian Orthodox Church on Buckingham Palace Road, London in the presence of her widower, three sons, sister and brother in law. Among the other notable attendees were members of the exiled Russian imperial family and nobility. Following the funeral Princess Catherine was buried in Brompton Cemetery. She left an estate worth £406 3s (about £19,800 today) to her husband.

Her widower Prince Vladimir was remarried on 12 August 1945 to a fellow widow, Mabel Iris Balfour, née FitzGeorge, a granddaughter of Prince George, Duke of Cambridge and like Princess Catherine a great niece of Grand Duchess Augusta. Prince Vladimir died on 13 July 1954.