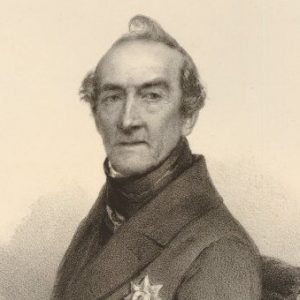 Grand Duke Georg was born on 12 August 1779 in Hanover the only surviving son of Duke Carl and his first wife Princess Friederike of Hesse-Darmstadt. He was christened Georg Friedrich Carl Joseph. At the time of his birth Georg was second in the line of succession to the throne behind his father.

Son of the heir presumptive

Georg spent his childhood living at Leine castle and later Herrenhausen castle both of which were in Hanover where his father was the Governor. Georg was aged just 3 when in 1782 he lost his mother who died shortly after she had given birth to her tenth child. Two years after his mothers death Georg’s father was married to his late wife’s sister Princess Charlotte of Hesse-Darmstadt. However tragically a year after the wedding his stepmother and aunt Charlotte died, just as his mother had done three years previously shortly after giving birth. With his uncle the reigning duke Adolf Friedrich IV in his early forties and a bachelor, having been on the throne for over twenty years, as he got older Georg’s education was centered around preparing him for the task of one day being the reigning duke himself.

After becoming a widow for a second time in August the following year Georg’s father retired as Governor of Hanover and took his children to Darmstadt to live with the family of his late wives. After the loss of two mothers Georg and his siblings were cared for by their maternal grandmother Landgravine Georg Wilhelm of Hesse-Darmstadt (born Countess Marie Louise of Leiningen-Dagsburg). By the time Georg had left Darmstadt for Neustrelitz in 1794 when he became heir to the throne he already held the rank of Captain in the British Army. As heir apparent he acquired the title “Hereditary Prince”.

Shortly after becoming heir Georg started his studies in law and philosophy at the University of Rostock where he remained until 1799. After leaving university Georg moved to Berlin to continue his studies while at the same time reside at the court of his brother in law King Friedrich Wilhelm III of Prussia who was married to his sister Luise. In 1802 Georg left Germany for Italy where he spent the next two years travelling. On his return to Germany he went to live for a time in Darmstadt, while his father began to actively involve him in the running of the government.

In November 1807, during the Napoleonic wars, Georg was given the task of going to Paris to negotiate on his father’s behalf for the entry of Mecklenburg-Strelitz into the Confederation of the Rhine, which had been established by Emperor Napoleon I shortly before the dissolution of the Holy Roman Empire. Mecklenburg-Strelitz which had been occupied by the French since 1806 and effectively forced into joining the Confederation, was also one of the first to abandon it. At the Congress of Vienna held between 1814 and 1815 Georg again represented his father. He also made a visit to England after Napoleon’s final defeat in 1815 at the Battle of Waterloo.  At the conclusion of the Congress of Vienna as a result of Georg’s lobbying and the support of Prussia and Hanover his father was raised to the dignity “Grand Duke” on 28 June 1815. As the heir apparent Georg also saw a change in title as he was raised from “Hereditary Prince” to “Hereditary Grand Duke” which also came with the higher style of “Royal Highness”. At the same time his elderly father handed over power to Georg.

A year later on 6 November 1816 Georg’s father died and he duly succeeded as grand duke. Having been in Switzerland at the time of his father’s death Georg immediately set about returning to Mecklenburg-Strelitz to assume the throne. His succession came at a difficult time for the grand duchy which had suffered many hardships under the French occupation during the Napoleonic wars and the subsequent war of German liberation.

Still unmarried at the time of his succession, on 12 August 1817, his 38th birthday, Grand Duke Georg married Princess Marie of Hesse-Kassel in Kassel.  Marie was the daughter of Landgrave Friedrich of Hesse-Kassel and his wife Princess Caroline of Nassau-Usingen. The couple had four children, Luise (1818-1842) who died of tuberculosis, a son and heir Friedrich Wilhelm (1819-1904), Caroline (1821-1876) who married Crown Prince Frederik of Denmark (later King Frederik VII) though they divorced before he succeeded to the throne, and a second son Georg (1824-1876) who married Grand Duchess Catherine Mikhailovna of Russia and founded the Russian branch of the grand ducal house.

A reforming and rebuilding reign

Having succeeded to the throne at a difficult time Georg set about rebuilding Mecklenburg-Strelitz. In 1819 in order to relive the amount of national debt he sold to Prussia the towns of Reifferscheid, Kronenburg and Schleiden in Eifel which had been awarded to Mecklenburg-Strelitz as war compensation by the Congress of Vienna. He made attempts to improve the standard of living in Mecklenburg-Strelitz by abolishing serfdom on 22 February 1820 and introducing compulsory education in 1826. Georg also tried to revitalise the state’s economy by improving infrastructure through the construction of new roads.

During Georg’s reign the revolutions of 1848/1849 broke out across Germany having spread from France which had witnessed the overthrow of King Louis Philippe in February 1848. Under pressure after revolts in Berlin and Vienna, Georg and the Schwerin Grand Duke Friedrich Franz II allowed for the creation of a joint assembly with the following elections won by the Liberals. The new assembly sketched a radical new constitution proposing a single parliamentary chamber, and in a country which had a long tradition of feudal aristocracy, it also advocated abolishing the privileges enjoyed by the nobility. However due to the double sovereignty the constitution would have over the sister states of Schwerin and Strelitz, this made the proposals almost impossible to implement. With the assembly sensing this they attempted to get rid of the double character of the government and began to focus on introducing the constitution in just Schwerin. Georg and his government seeing this as an attempt to paralyse them broke off all negotiations with the assembly after this. However this did not stop the constitution being adopted by the Schwerin government in the summer of 1849.

Georg’s reign came to an end with his death at the age of 81 on 6 September 1860 in Neustrelitz. He was interned in the family vault in the Church of St John in Mirow. His widow Marie survived him by twenty years dying in 1880. Georg’s elder son Friedrich Wilhelm succeeded him as grand duke.