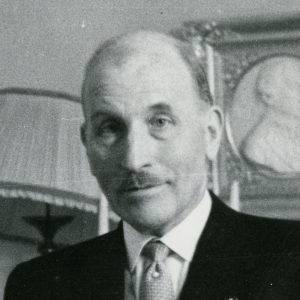 Duke Georg, Dr. rer. pol. was born on 5 October 1899 at the Oranienbaum Palace, near St Petersburg. He was the youngest child and only son of Duke Georg Alexander and his wife Countess Natalia Feodorovna of Carlow.

As a second generation member of the family to be born in Russia, Duke Georg spent his childhood in St Petersburg with his family at their river embankment mansion 46 Fontanka, which his father had acquired after selling the Mikhailovsky Palace. The family also owned the Oranienbaum Palace, located on the Gulf of Finland near St Petersburg, which provided an idyllic childhood for Duke Georg and his sisters. For his secondary education Duke Georg studied at Imperial Lyceum in St Petersburg.

With the sudden and unexpected death of his father in 1909, Duke Georg’s uncle Duke Carl Michael was appointed the guardian of Duke Georg and his sisters by Grand Duke Adolf Friedrich V. Despite having grown up in Russia and not officially being a member of the Grand Ducal Family, Duke Georg grew up connected to Mecklenburg and his relations there. On his last visit to Germany before World War I broke out he joined the Grand Ducal Family at the small mourning ceremony in Berlin that was held days after the death of Grand Duke Adolf Friedrich V in June 1914.

Too young to serve in the First World War, Georg’s involvement was restricted to helping victims of the war through the hosting of charitable events at Oranienbaum. The overthrow of the Russian monarchy in February 1917 brought about great upheaval on Georg and his family. With the internal situation in Russia deteriorating Georg and his mother left St Petersburg in the summer of 1917 travelling to Kislovodsk in the Caucasus region of Russia where they joined his surviving sisters and their families. His late father’s siblings, Duke Carl Michael and Princess Helene of Saxe-Altenburg, joined them in the autumn. In late 1917 the Russian assets of the family were nationalised.

With the Bolsheviks success in the Russian Civil War it soon became too dangerous for Georg and his family to remain in Russia. Faced with the encroaching Red terror Georg and his family left Russia in April 1919 aboard a British ship. In exile the family separated, Georg, his mother, widowed sister Princess Maria Galitzine and her young children initially settled in Southern France, his eldest sister Princess Katharine Galitzine settled in England with her husband Prince Vladimir Galitzine and their children. His uncle and aunt, Duke Carl Michael and Princess Helene of Saxe-Altenburg, settled in Denmark.

Beginning of a life in exile

Now safely in Western Europe, Georg was married on 7 October 1920 in Geneva to fellow Russian exile Countess Irina Mikhailovna Tolstoy, the widow of Count Aleksandr Mikhailovich Tolstoy (1888-1918) who she had married on 23 October 1915 in St Petersburg and by whom she had two children, Irina (1917-1998) and Mikhail (1918-2004). On 18 November 1920 Georg converted from Lutheranism to Roman Catholicism. His wife followed suit on 18 July 1921 converting to Roman Catholicism from the Eastern Orthodox faith.

During their time in France, Georg and his wife lived on the Promenade des Anglais in Nice. It was here on 27 August 1921 that the couple welcomed their first child Georg Alexander. In 1922, Georg, his wife and newborn son moved to Germany taking up residence at Schloss Remplin in Mecklenburg-Schwerin, a property owned by his uncle Duke Carl Michael. Over the next couple of years Georg and his wife welcomed two more children, Alexander, born 1922, who only lived for a few weeks and a daughter Helene (1924-1962). During this period Georg studied for firstly a Diplom in Political Science and then a Doctorate in Political Science from the University of Freiburg.

Since the death of Grand Duke Adolf Friedrich VI in February 1918, Georg’s uncle Duke Carl Michael was the head of the House of Mecklenburg-Strelitz. As his uncle was the sole male dynast in order to secure the survival of the grand ducal house on 11 September 1928 he adopted Georg and his family as his heirs. The adoption was legally recognised by a court in Malchin on 5 October 1928, Georg’s 29th birthday. As a result of the adoption Georg, his wife, and children all became members of the House of Mecklenburg-Strelitz acquiring the title Duke/Duchess of Mecklenburg.

On account of the close ties between the Russian branch of the House of Mecklenburg-Strelitz and the House of Romanov, the Russian Emperor-in-exile Grand Duke Kirill Vladimirovich was notified of the adoption and on 18 July 1929 bestowed the style Serene Highness on his cousin Georg and his family.

After his adoption and so to honour the memory of his late mother Georg proposed retaining use of the title Count of Carlow for himself as his secondary title. On this basis the adoption was recognised on 23 December 1929 by the head of the senior branch of the House of Mecklenburg, Grand Duke Friedrich Franz IV of Mecklenburg-Schwerin. Henceforth Georg was styled as His Serene Highness Duke Georg of Mecklenburg, Count of Carlow. He also adopted the Mecklenburg-Strelitz coat of arms and family motto ‘Avito viret honore’, meaning ‘He flourishes with hereditary honours’.

Duke Carl Michael who had fought for Russia in the First World War ended his Danish exile in 1930 and joined Georg and his family at Schloss Remplin. In 1933 Georg and his wife became parents for the final time with the birth at Remplin of another son, Carl Gregor. When Duke Carl Michael died at Remplin on 6 December 1934, Georg duly succeeded him as head of the House of Mecklenburg-Strelitz.

During the 1930s Georg, who had been denied German citizenship, began to face persecution at the hands of the ruling Nazi Party who viewed him with suspicion due to his Russian roots, royal status and perceived involvement in ‘political Catholicism’. In exile Georg never forgot his Russian roots. Having spent his youth in Russia and with his family closely related to ruling House of Romanov, Georg learnt firsthand a number of interesting and little known stories about the Romanov’s. With this knowledge he maintained close contact with various historians of Russian history including Karl Stählin whose multi volume work on the history of Russia included suggestions made by Georg.

He also remained close to his Romanov cousin’s in exile. In January 1938 he hosted a dinner at the Bristol Hotel in Berlin for Grand Duchess Kira Kirillovna of Russia and Prince Louis Ferdinand of Prussia to celebrate their engagement. While in October of that year he attended the burial of Grand Duke Kirill Vladimirovich in the mausoleum of Coburg.

Under the threat of expropriation Georg was forced by the Nazi Party to sell of his land holdings, which consisted of forests and fields, to the state for a nominal price well below its real value. As such by the time the Second World War broke out all that remained was Schloss Remplin itself. However even the Schloss was not safe as on the night of 10-11 April 1940 it was largely destroyed in a fire instigated by the local Nazi Party official (Gauleiter). After the fire Georg was forced to sell everything to the state for a minimal price on the assurance that once he agrees to the sale they will discuss the estate of the late Grand Duke Adolf Friedrich VI. The estate which amounted to around 6 Million marks was to give Georg the opportunity to buy another residence in Mecklenburg. Schloss Weisdin, located near to Neustrelitz, was identified as a suitable property however the purchase never went through as the Gauleiter reneged on the agreement and forced Georg to leave Mecklenburg.

In what he hoped would only be a temporary move before he could someday return to Mecklenburg, Georg and his family took up residence in a Villa located at 4 Nikischstrasse in the Grunewald quarter of Berlin where they became a fixture of high society, often entertaining ambassadors, generals and fellow royalty at lunch with the Jesuit priest and former Crown Prince of Saxony, Father Georg, a particularly close friend. As Father Georg could not trust normal post on account of his anti-Nazi views, Duke Georg was instead entrusted to convey his correspondence to General Friedrich Olbricht, later a leading figure in the 20 July 1944 plot against Adolf Hitler. Duke Georg also provided Father Georg with refuge at his Grunewald villa while the Gestapo carried out searches of his room at Canisius Kolleg, the Jesuit college in Berlin.

Duke Georg and family remained in Berlin until February 1944 when their villa was destroyed during an Allied bombing raid. Following the loss of their second home in the space of four years Georg and his family moved into Schloss Birstein in Hesse, the Schloss was home to Georg’s son in law Prince Franz Ferdinand of Isenburg who had married his step daughter Countess Irina Tolstoy at Remplin in 1939.

In August 1944 after having attempted to use his contacts with military officers to gain bail for two catholic priests, Georg was arrested by the Nazi secret police, the Gestapo. After a period incarcerated in the Gestapo headquarters in Prinz-Albrecht-Straße in Berlin, Georg was sent to the Sachsenhausen concentration camp where he was held until February 1945, gaining his freedom only after the intervention of a Papal nuncio. Following his release Georg and his family moved to Sigmaringen in Southern Germany at the invitation of Princess Margarete of Hohenzollern the sister of the late Father Georg of Saxony who had died in mysterious circumstances on 14 May 1943 while swimming in the Groß Glienicker Lake.

With the end of the Second World War Georg’s hoped for return to Mecklenburg became impossible due to the partition of Germany into West and East. Having been forced out of first Russia and now Mecklenburg by communism, Georg and his family remained in Sigmaringen making the Prinzessinnen-Palais located at 9 Karlstrasse their home. In the post war period to support his family Georg started working as a translator.

After thirty four years of marriage Georg was widowed on 22 January 1955 when his wife Duchess Irina passed away in Sigmaringen aged 62. The Duchess was the first member of the grand ducal family to be buried in the family crypt in the chapel at Inzigkofen, Sigmaringen.

In May 1956 Duke Georg’s engagement to Archduchess Charlotte of Austria, the daughter of the last Austrian Emperor Karl and his wife Empress Zita, was announced. In the presence of members of the German and Austrian royal houses and media from around the world, on 25 July 1956 Duke Georg and Archduchess Charlotte were married in the baroque church at Pöcking, the civil service having taken place on 21 July. After the ceremony the newlywed couple spent five hours on the terrace of the villa of Charlotte’s brother Crown Prince Otto to receive the congratulations of the five thousand Austrians who had made their way to Pöcking. Georg’s second marriage was childless.

Georg died on 6 July 1963 in Sigmaringen aged 63. He was interred alongside his first wife in the family vault in Inzigkofen, Sigmaringen. Georg’s elder son Georg Alexander succeeded as head of the House of Mecklenburg-Strelitz. His widow Charlotte survived him by twenty six years dying on 23 July 1989 at the age of 68.