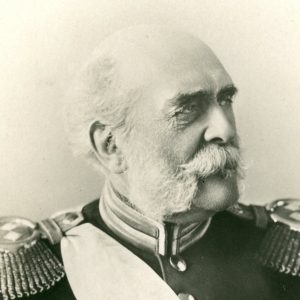 The new Hereditary Grand Duke was christened on 2 November 1819 receiving the names Friedrich Wilhelm Carl Georg Ernst Adolf Gustav. Among his 19 godparents was his cousin and namesake Crown Prince Friedrich Wilhelm of Prussia (later King Friedrich Wilhelm IV). As the son of the reigning grand duke, Friedrich Wilhelm grew up at the grand ducal court in Neustrelitz with his parents and siblings Luise, Caroline and Georg. As a young child he suffered from ill health. In the autumn of 1823 the young Friedrich Wilhelm fell ill with scarlet fever and had to travel to Berlin to receive treatment, eventually making a full recovery.

Friedrich Wilhelm and his brother received their early education from their governor, Count Finkenstein. As he got older he was educated by professors from the local school in Neustrelitz. Having embraced his initial education, following his confirmation on 23 September 1836 and not yet 18, he left Neustrelitz later on that year to study history and law at the University of Bonn receiving a solid education by noted professors, academics and politicians. While at Bonn, Friedrich Wilhelm befriended various German princes including the future Duke Ernst II of Saxe-Coburg and Gotha, his brother Prince Albert, who went on to become the consort of Queen Victoria of the United Kingdom, and the future Prince Adolf I of Schaumburg-Lippe. Friedrich Wilhelm would undertake a number of group trips and outings during his time at university and spent part of his autumn holidays at his mothers family’s estate, Schloss Rumpenheim near Frankfurt am Main. Friedrich Wilhelm and his contemporaries at Bonn were some of the first German heirs to attend university, in the past it had been traditional for princes to go straight into the army. He left Bonn in 1839.

With the completion of his studies in 1839 Friedrich Wilhelm spent some time at the Berlin court of his uncle King Friedrich Wilhelm III of Prussia. In the summer 1840 he went on a trip through Germany, Switzerland and Italy. While travelling in Italy he stayed over in Rome as present in the city at the same time were his uncle and aunt, the Duke and Duchess of Cambridge, and their daughter, his first cousin, Princess Augusta. The families were very closely related, the Duchess was a sister of Friedrich Wilhelm’s mother and the Duke a son of Queen Charlotte, the wife of King George III of Great Britain and a sister of Friedrich Wilhelm’s grandfather, Grand Duke Carl. After returning to Germany he made his way to Neustrelitz to be present at the 1841 marriage of his sister Caroline to the Crown Prince of Denmark (the future King Frederik VII) in Neustrelitz. Having accompanied his sister and her husband on their voyage to Copenhagen, once back in Germany, Friedrich Wilhelm travelled to Potsdam in order to begin an active army career. On 11 September 1841 he joined the Prussian Army’s 1st Uhlan Guard Regiment with the rank of Captain.

Now well prepared for his future role as grand duke with a solid education and military service behind him, all that remained was for Friedrich Wilhelm to find a wife and hopefully secure the direct succession. With only one person in mind he travelled to Britain in 1842 where got engaged that autumn to his cousin Princess Augusta of Cambridge. As required Queen Victoria of Great Britain, Augusta’s cousin, gave her formal consent at a Privy Council Meeting on 2 November 1842. With the Queen’s consent having been acquired Friedrich Wilhelm left the United Kingdom on 21 December. In April 1843 Friedrich Wilhelm requested and received a discharge from active service in the Prussian Army.  Later that month he returned to the United Kingdom for his wedding. With the marriage contact signed in London on 23 June 1843 the formalities were complete. Five days later at Buckingham Palace the couple were married.

Following the conclusion of the wedding celebrations in London, Friedrich Wilhelm brought his wife, the new Hereditary Grand Duchess, back to Neustrelitz where she was welcomed with great celebrations and festivities. The couple later returned to Britain where Friedrich Wilhelm resumed his law studies at the University of Oxford becoming a Doctor of Civil Law. In 1845 the hereditary grand ducal couple’s first son, Friedrich Wilhelm, was born at Cambridge House in London. Sadly the little Hereditary Prince only lived for a few hours. The couple had to wait until a month after their fifth wedding anniversary to welcome their second son, Adolf Friedrich, who was born in Neustrelitz.

Although the hereditary grand ducal family would spend time in Britain visiting Augusta’s family, as the years went by with Friedrich Wilhelm oneday to become grand duke it was important for him to be in Neustrelitz in order to became more involved in the affairs of state to ensure he would be as prepared, and as informed as possible for when the day came for him to succeed his father. In 1851 Friedrich Wilhelm sustained an injury to his left eye eventually causing him to lose his sight in the eye altogether. Although doctors did not think the sight in his other eye would become affected within a few years his right eye did unfortunately become affected and eventually also went. Because of his blindness a close friendship and bond developed between Friedrich Wilhelm and his first cousin King Georg V of Hanover who had also lost his sight.

Although an active army career had come to an end in April 1843, Friedrich Wilhelm continued to receive promotions in the Prussian Army throughout his tenure as heir apparent. He was made a Major on 12 September 1842, a Colonel on 4 April 1843, a General Major on 22 March 1845, a General Lieutenant on 4 April 1850 and finally a General of the Cavalry on 31 May 1859. He was also made a General of the Infantry in the Royal Hanoverian Army on 4 December 1860.

Friedrich Wilhelm and his family were visiting Augusta’s family at Kew in Britain during the summer of 1860 when they received word that his father Grand Duke Georg was seriously ill. Friedrich Wilhelm and his wife then left to return to Neustrelitz arriving ten days before his father’s death on 6 September 1860. Coming to the throne twelve years after the revolutions of 1848 and despite the Liberal reforms elsewhere, Friedrich Wilhelm was a firm believer in Mecklenburg’s ancient feudal constitution which his father had also successfully supported when the Grand Duke of Mecklenburg-Schwerin had tried to introduce a Liberal constitution to appease the revolutionaries. Due to the common assembly the two grand duchies shared, any constitutional changes would need the consent of both states thus making any reforms impossible during Friedrich Wilhelm’s reign.

A time of change in Germany

Friedrich Wilhelm’s reign witnessed a number of wars which brought about great change to Germany and ever closer union between the German states. The first war was the Second Schleswig War of 1864 between the German Confederation, dominated by Prussia and Austria, and which Mecklenburg-Strelitz belonged to, against Denmark. During the second war of his reign, the Austro-Prussian War of 1866, Friedrich Wilhelm was given a verbal guarantee by King Wilhelm I of Prussia that the neutrality of Mecklenburg-Strelitz would be respected. However the king was undermined by his powerful Minister President Otto von Bismarck who sent Friedrich Wilhelm an ultimatum demanding that he mobilise his forces to fight alongside Prussia or Mecklenburg-Strelitz would be occupied and treated as an enemy state.  With the overwhelming superiority of the Prussian forces, and little prospect that the Austrian’s would be able to offer help due to the geographical situation,  Friedrich Wilhelm was left with little option but to accede to the ultimatum which he reluctantly did ordering mobilisation.

Following the resounding Prussian victory although Friedrich Wilhelm had effectively lost his political independence he had at least saved the grand duchy from the fate which befell Prussia’s other enemies in the conflict, the Duke of Nassau, the Elector of Hesse and notably Friedrich Wilhelm’s cousin King Georg V of Hanover, who were all deposed and their countries annexed by Prussia. With Friedrich Wilhelm angry at his treatment and the annexation of Hanover, the relationship between Mecklenburg-Strelitz and “horrible” Prussia, as Friedrich Wilhelm referred to them, would be greatly strained afterwards. Despite his views towards Prussia he had little choice but to join the Prussian led North German Confederation which Mecklenburg-Strelitz duly joined.

With a reign lasting not yet ten years Friedrich Wilhelm witnessed a third war on 19 July 1870 with the outbreak hostilities between Prussia and the French Empire of Napoleon III.  Due to his hostility to Prussia he was not keen to join their side in the war. At the beginning of the conflict he had even provocatively replaced his minister to Berlin with a Hanoverian and staunch supporter of deposed House of Hanover. The new minister was viewed with such suspicion in Berlin that for a time Mecklenburg-Strelitz was again threatened with invasion and possible annexation until Friedrich Wilhelm gave in and Mecklenburg-Strelitz sided with the Prussians. After the resounding Prussian victory, the King of Prussia, Wilhelm I, was proclaimed German Emperor at the Palace of Versailles on 18 January 1871. The result of this proclamation was the creation of a federal German Empire made up of Prussia and the various smaller German states such as Mecklenburg-Strelitz. The new Imperial constitution introduced the people of Mecklenburg-Strelitz to democracy as the Imperial Reichstag was elected by universal suffrage.

In spite of the wars great advancements were made around the same time of the conflicts, and in the years following, with the construction of new roads and railways connecting Mecklenburg-Strelitz with the now united and rapidly industrialising Germany. A religious man, Friedrich Wilhelm took a keen interest in the restoration and construction of churches in the grand duchy. Also having received a solid education himself he took a particular interest in the school system in Mecklenburg-Strelitz, seeking to improve school regulations and teaching, and overseeing the construction and refurbishment of school buildings. In 1864 Friedrich Wilhelm jointly instituted the House Order of the Wendish Crown with the Grand Duke of Mecklenburg-Schwerin in order to honour and reward the special achievements of the people of Mecklenburg and members of other royal families.

Although the reign of Friedrich Wilhelm witnessed three wars it also saw a period of financial diligence and prosperity. Twice a year he would summon to Neustrelitz his Berlin banker to issue him with instructions on how he wished his money to be used on the stock exchange. Through his sound financial management Friedrich Wilhelm amassed a great fortune for Mecklenburg-Strelitz dragging the country out of debt and bolstering the national treasury. When Friedrich Wilhelm and his wife Augusta had their diamond wedding anniversary in 1903 to celebrate their fifty years of marriage, every citizen of Mecklenburg-Strelitz, then with a population of around 100,000, was given 25 Pfennig.

A year after celebrating his diamond wedding anniversary and with a reign lasting almost 44 years Friedrich Wilhelm fell ill. After being confined to his bed for a few months the 84 year old Grand Duke died in Neustrelitz on 30 May 1904. He had written his will on 4 August 1890 and had not altered it during the succeeding 14 years. His funeral was held at the Schloss Church in Neustrelitz on 6 June. At the time of his death he was the oldest German sovereign and the oldest Prussian general, and, although known Friedrich Wilhelm was known for his anti Prussian views, the German Emperor attended his funeral. Following the funeral in Neustrelitz, Friedrich Wilhelm’s remains were brought to Mirow and interned in the family vault in the Church of St John.

He was succeeded as grand duke by his only surviving son, Adolf Friedrich V. His wife Augusta also survived him, dying in the middle of the First World War on 5 December 1916 aged 94.