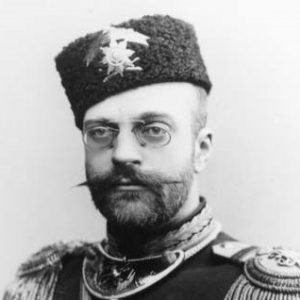 Duke Carl Michael, PhD was born on 17 June 1863 in the Oranienbaum Palace near St Petersburg, the youngest child of Duke Georg and his wife Duchess Ekaterina. He was christened Carl Michael Wilhelm August Alexander. In Russia he was known by the name and patronymic Mikhail Georgyevich, meaning ‘Michael son of Georg’.

A German prince in Russia

Carl Michael was born and raised in Russia where his family owned a number of vast estates including Oranienbaum and the Mikhailovsky Palace, which his mother had inherited from her parents Grand Duke Mikhail Pavlovich, the youngest son of Emperor Pavel I, and Grand Duchess Elena Pavlovna, born Princess Charlotte of Württemberg. Although Carl Michael and his family were a part of the Russian court and closely related to the Imperial Family, because they were not official members of the Imperial Family they were termed “half sovereigns” by the Romanov’s, a term also used to describe the other princely families who were closely related to the Imperial Family, the Oldenburg’s and the Leuchtenberg’s. With the death of his father in 1876 just three days after his 13th birthday, he began to receive an annual apanage from the Grand Duchy of Mecklenburg-Strelitz.

Between 1879 and 1883 Carl Michael was tutored by Baron Ferdinand von Wrangell, a Russian Naval Officer, before leaving Russia to spend three and a half years studying in Germany. Carl Michael’s mother appointed Baron Otto Buxhoeveden, a member of the Russian State Council, to be his companion during this period. In Germany Carl Michael attended the Emperor Wilhelm University of Strassburg where he studied national economics under the guidance of distinguished professor Lujo Brentano. He graduated from Strassburg in 1887 as a Doctor of Philosophy (PhD).

With the death of their mother in 1894, Carl Michael and his siblings inherited a vast array of valuable items and property in Russia.  One of the properties inherited was the Mikhailovsky Palace which was subsequently sold to the Russian Emperor Nikolai II for five million roubles who transformed it into the State Russian Museum. Also as part of his share of the inheritance Carl Michael received Schloss Remplin located in Mecklenburg-Schwerin.

Following the death of his brother Duke Georg Alexander in 1909, Carl Michael devoted himself to the welfare of his widowed sister in law Countess Natalia of Carlow and his nieces and nephew, Katharina, Marie, Natalia and Georg. As the children were nationals of Mecklenburg, Carl Michael was appointed their guardian by Grand Duke Adolf Friedrich V.

After receiving Adolf Friedrich VI’s consent Carl Michael was naturalised in Russia on 25 July 1914. Not long after Austria-Hungary declared war upon Serbia and the First World War broke out, with Russia entering on 1 August when Germany declared war. Carl Michael had been at the Ministry of War since 1910 but he resigned shortly after the outbreak of hostilities to take to the field with the Imperial Russian Army. After initially being at the disposal of the commander of the Guard corps, who put him in command of the artillery on the Dvina front, in late 1914 he was appointed Inspector of Artillery of the Guard, a post he held until July 1916. In December 1915 he had been made an Adjutant General.

Carl Michael was in St Petersburg to witness the turmoil of the February 1917 revolution that culminated in the abdication of the Emperor Nikolai II. As he was a relative of the overthrown Emperor he was dismissed from the army by the new Provisional government. In March 1917 a rumour spread among the lower ranks of a naval college that Carl Michael’s palace at Oranienbaum had a secret stash of gold, silver and weapons. A search was carried out and although no weapons were found they did uncover hidden crystal ware and silver. The investigating officer reported his findings to the State Duma and on 6 March Carl Michael was arrested and taken to the Tauride Palace where he spent the night before being questioned the next day. He was released soon after.

After his release Carl Michael returned to his home in St Petersburg. However in the autumn of 1917 with the internal situation in Russia worsening he left the city with his widowed sister Princess Helene of Saxe-Altenburg to join up with their sister in law Countess Natalia of Carlow and her children in Kislovodsk, a city in the Caucasus region of Russia. A few months later the family’s Russian property was expropriated.

Head of the house

On 23 February 1918 Grand Duke Adolf Friedrich VI died. As the next agnate Carl Michael immediately succeeded him as head of the House of Mecklenburg-Strelitz and de jure grand duke. However because he was in Russia and had indicated previously that he would renounce the throne in the event of his succession, Grand Duke Friedrich Franz IV of Mecklenburg-Schwerin travelled to Neustrelitz where he issued a proclamation assuming control of the government as regent while “various facts” surrounding the succession were resolved. Although Carl Michael had served on the opposite side to Germany during the war this did not exclude him from the succession. In 1917 the German state of Saxe-Coburg and Gotha specifically issued legislation excluding subjects of enemy states, in effect the British and Belgian Royal Families, from the succession. Further complicating matters was the will of Adolf Friedrich VI who asked that Friedrich Franz IV’s younger son Duke Christian Ludwig (1912-1996) succeed him as grand duke of Mecklenburg-Strelitz to preserve the independence of the grand duchy.

With Carl Michael having previously indicated that he would renounce the throne in the event of his succession, on 17 May 1918 the regent Friedrich Franz IV wrote to him seeking to clarify his position. If Carl Michael did renounce his rights to the throne it would most likely have resulted in the union of the two Mecklenburg’s due to the terms set out in the 1701 Treaty of Hamburg that established Mecklenburg-Strelitz. The people of Strelitz who cherished their independence, were vehemently opposed to such a union and sent a petition to Carl Michael, which never reached him, calling on him to accept the throne. Friedrich Franz’s letter from 17 May was received by Carl Michael on 24 July. He replied to the letter on 28 July renouncing his rights to the throne and regency in Mecklenburg, although he reserved all other rights due to him as a member of the House of Mecklenburg-Strelitz.

With the war now drawing to a close; in November 1918 events in Germany would render Carl Michael’s response irrelevant as the throne would be taken not by renunciation but revolution. On 14 November, Friedrich Franz IV had to renounce his own throne as the whole German Empire transformed into a Republic, while his regency in Strelitz also came to an end on the same day. Friedrich Franz received Carl Michael’s letter in December 1918/January 1919 while exiled in Denmark and when he no longer had the right to represent Mecklenburg-Strelitz. As there was no longer a throne to renounce, by the time Carl Michael’s letter arrived it had no legal effect.

With the Red Army’s success in the Russian Civil War, Carl Michael and his family left the country in 1919 under British protection to escape the encroaching red terror. Now exiles the family disembarked in France, Carl Michael and his sister Princess Helene then made their way to Copenhagen where Carl Michael became involved in various charities for exiled Russian soldiers. He served as chairman of “Mutual Charitable Society for Russian Officers in Denmark” and managed to enlist the help of his cousins and fellow exiles the Russian Grand Duchesses Xenia and Olga who painted works of art which were sold at raffles to help raise money for disabled soldiers.

In October 1919 Carl Michael opened negotiations with the republican government of the Free State of Mecklenburg-Strelitz in order to settle a number of legal claims. Carl Michael’s letter renouncing the throne had instantly been viewed as meaningless by the Free State of Mecklenburg-Strelitz when it was forwarded to them from the deposed Grand Duke Friedrich Franz IV. This was a view supported by the respected jurist Heinrich Triepel who the Free State hired to look into the issue of the validity of the renunciation in respect of the compensation negotiations. Duke Carl Michael and his legal team also took the view the renunciation was not valid.

During the process he was denied citizenship and was expropriated of some private property for minimal compensation. His claim was settled in 1921 when, in return for renouncing his claim to the throne, he received 5,000,000 Mark’s in cash. Not long after in the post war period the mark fell to one-billionth of its pre war value due to hyperinflation. Seeking relief from his financial problems, in 1923 Carl Michael auctioned off at Christie’s in London his valuable collection of French snuff boxes which he had inherited from his father. However he lost 26% of the sale’s net proceeds which had to be handed over to the Allies Reparations Fund as the items had been imported from Germany.

As the last male in Mecklenburg-Strelitz family with Carl Michael’s death the grand ducal family, with its history dating back over 200 years, would die out. In order to secure its survival on 11 September 1928 he adopted his non dynastic nephew Count Georg of Carlow and his children as his heirs granting them membership of the House of Mecklenburg-Strelitz and the title Duke/Duchess of Mecklenburg. The adoption was recognised by a court in Malchin on 5 October 1928 and received formal recognition from Grand Duke Kirill Vladimirovich, the Head of the Imperial House of Russia, on 18 July 1929 and later that year on 23 December from Grand Duke Friedrich Franz IV.

Carl Michael left Denmark in 1930 and moved into Schloss Remplin which had been occupied by his nephew Georg since 1922. He died there four years later on 6 December 1934 at the age of 71 and was buried in Remplin cemetery. His nephew, styled Duke Georg of Mecklenburg since the adoption, succeeded him as head of the House of Mecklenburg-Strelitz.