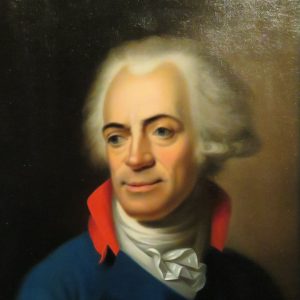 Grand Duke Carl was born on 10 October 1741 in Mirow Castle the second son Duke Carl, Prince of Mirow and his wife Princess Elizabeth Albertine of Saxe-Hildburghausen. He was christened Carl Ludwig Friedrich. With the throne at his birth occupied by his uncle Duke Adolf Friedrich III, Carl was third in the line of succession behind his father and elder brother. As the second son of the heir presumptive it seemed unlikely that Carl would himself one day succeed to the throne.

Prince of Mirow and heir presumptive

Carl spent the first eleven years of his life in Mirow where he and his siblings were educated under the guidance of the Lutheran Reverend, Gottlob Burchard Gentzmer. On 5 June 1752 Carl’s father the Prince of Mirow died. Later that same year on 11 December his uncle Duke Adolf Friedrich III also died. As a result Carl’s elder brother succeeded to the throne as Duke Adolf Friedrich IV while Carl himself was now heir presumptive.

With his brothers succession Carl and his family moved their residence from Mirow to Neustrelitz. A few years later at the age of 14 Carl left home soon ending up as a Major in the army of the Elector of Hanover (also King of Great Britain). Carl had in fact technically been in the Hanoverian service since the age 4 when he was made a Captain. He continued to serve in Hanover until 1758 when he spent a year studying in Geneva. His link to Hanover became even closer when his sister Charlotte married the Hanoverian Elector and King of Great Britain, George III in September 1761. Carl and his elder brother had accompanied their sister on her voyage to Great Britain a month earlier.

In 1762 with the Seven years’ war (1756-1763) nearing its end Count Wilhelm of Schaumburg-Lippe, who had been appointed commander of British and Portuguese forces, requested that Carl accompany him to Lisbon to assist with the reorganisation of the Portuguese army, which was then engaged in the war against Spain. Carl sailed from Britain on his brother in law’s ship the HMS Venus and arrived in Lisbon in July a couple of days after Count Wilhelm. He was received by the King of Portugal, Jose I and his consort Queen Mariana Vitória a day after his arrival, with the king appointing him Colonel of a cavalry regiment and promoting him to the rank Lieutenant General. The cavalry regiment he became colonel of was also named “Duke of Mecklenburg” after him. On completing his posting in Portugal Carl arrived back in Britain aboard HMS Venus in January 1763. Having impressed his brother in law King George III with his service in Portugal, a month after his return Carl was promoted from a Major General to a Lieutenant General in the Hanoverian service. He would also go on to be made Governor of Hanover by the king.

Carl was married on 18 September 1768 in Darmstadt to Princess Friederike of Hesse-Darmstadt a daughter of Landgrave Georg Wilhelm of Hesse-Darmstadt and Countess Marie Louise of Leiningen-Dagsburg. The couple would have ten children of whom five survived into adulthood. This surviving daughters were Charlotte (1769-1818) who married Duke Friedrich of Saxe-Hildburghausen, Therese (1773-1839) who married Prince Karl Alexander of Thurn and Taxis, Luise (1776-1810) who married King Friedrich Wilhelm III of Prussia and Friederike (1778-1841) who married first Prince Ludwig of Prussia, second Prince Friedrich of Solms-Braunfels and third King Ernst August of Hanover. Only one son survived into adulthood Hereditary Prince Georg (1779-1860).

Shortly after giving birth for the tenth time Friederike died on 22 May 1782 leaving Carl widowed with a young family to care for. Two years after the loss of his wife Carl was married in Darmstadt for a second time on 28 September 1784 to Princess Charlotte of Hesse-Darmstadt, the younger sister of his late wife. In Germany marrying the sister of a deceased wife was a common and popular practice at the time in order to provide the children with the most natural step mother possible. However the new domestic happiness was cut tragically short when Charlotte died on 12 December 1785 in the same circumstances as her late sister shortly after giving birth to a son, Carl (1785-1837).

Having been widowed for the second time, in the August of the following year Carl asked his brother in law King George III to relive him from the post of Governor of Hanover. The king granted his request and as a reward for his long service granted Carl a pension and promoted him to the rank of Field Marshal. With his children Carl then retired to Darmstadt to live with the family of his late wives. With the children cared for by their grandmother, over the next few years Carl spent time travelling and visiting members of his family in Neustrelitz and Britain. Also between the years 1785 and 1793 he had the satisfaction of seeing his daughters married. With Darmstadt close to the Imperial Free City of Frankfurt, Carl represented the House of Mecklenburg-Strelitz at the last ever coronations of Holy Roman Emperors, those of Leopold II in 1790 and Francis II in 1792.

In 1794 Carl was appointed President of an Imperial Credit Commission with the task of trying to avert the bankruptcy of the Duchy of Saxe-Hildburghausen which was ruled by his son in law. His role would be short lived however as while in Hildburghausen he received word of the passing of his brother Adolf Friedrich IV who died on 2 June 1794. Carl then immediately set about returning to Neustrelitz for the funeral of his brother and to assume the throne. On becoming ruling duke he is sometimes known by the regnal name “Carl II” as he was the second ruler of that name after Duke Carl I of Mecklenburg-Güstrow (died 1610).

After a peaceful reign spanning twelve years the invasion of Germany by the French Emperor Napoleon I brought great upheaval and change to Germany. Following defeat at the hands of Napoleon the Emperor Francis II abdicated on 6 August 1806 and the Holy Roman Empire was dissolved. Although Carl had declared his neutrality this was violated by Napoleon as French troops invaded and occupied the duchy in October. Due his high profile, being the brother of the British queen and father of the Prussian queen, Carl was able to remain in the duchy and was thus spared the same fate of his kinsman the Schwerin duke who had been exiled to Denmark.

In 1808 after having endured two years of occupation Carl was forced to admit Mecklenburg-Strelitz into the Confederation of the Rhine, which had been created by Napoleon, and to provide the Emperor with soldiers to support his campaigns. Having been forced to suffer the occupation in silence for many years on 30 March 1813 Carl began to openly call upon the population to fight against Napoleon. Following the defeat of Napoleon the rebuilding and reorganisation of Central Europe began at the Congress of Vienna which convened in September 1814.

In recognition of the contribution made by Mecklenburg-Strelitz the congress awarded the duchy the towns of Reifferscheid, Kronenburg and Schleiden, all located in the Eifel region of Western Germany, though they were to be administered by Prussia.  Having witnessed his kinsman the Schwerin duke be raised to the dignity “Grand Duke” on 14 June 1815 by the congress, and although Mecklenburg-Strelitz was considerably smaller than Mecklenburg-Schwerin, Carl’s son Hereditary Prince Georg lobbied for his father to also be raised to the title grand duke.  After receiving the backing of Hanover and Prussia on 28 June 1815 Carl was granted the grand ducal title and style “Royal Highness”. On the same day the 73 year old grand duke effectively withdrew from government and handed power over to his son. After the dissolution of the Holy Roman Empire in 1806, Mecklenburg-Strelitz became a member of the German confederation after it was created by the Congress of Vienna in 1815.

In the summer of 1816 Carl travelled around a number of German towns visiting family. Having suffered from inflammation of the lungs, from which he was believed to have recovered, early in the morning of 6 November 1816 Carl was taken ill and died in Neustrelitz at 4pm that afternoon at the age of 75. The funeral of the first Strelitz grand duke was held on 14 November in Mirow where his life had begun, and he was interned in the family vault in the Church of St John. His eldest son and heir Georg succeeded him as grand duke.