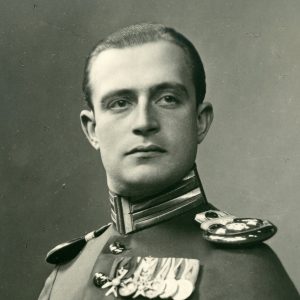 The young hereditary prince was christened Adolf Friedrich Georg Ernst Albert Eduard in Neustrelitz on 19 July 1882 with holy water sent from the River Jordan in Palestine. The christening was part of a double celebration for Mecklenburg-Strelitz as the day also marked the 60th birthday of his grandmother Grand Duchess Augusta. Adolf Friedrich’s godparents were his two grandfathers Grand Duke Friedrich Wilhelm of Mecklenburg-Strelitz and Duke Friedrich I of Anhalt, his uncle the future Duke Eduard of Anhalt, his great aunts Duchess Ekaterina of Mecklenburg-Strelitz (born Grand Duchess of Russia) and Princess Maria Anna of Prussia and Duchess Agnes of Saxe-Altenburg (both born Princesses of Anhalt), his great uncles Prince George, Duke of Cambridge and Duke Ernst I of Saxe-Altenburg, the future King Edward VII of the United Kingdom, Princess Helena of Schleswig-Holstein (born Princess of Great Britain), the future German Emperor Friedrich III and Grand Duke Friedrich Franz II of Mecklenburg-Schwerin.

Adolf Friedrich spent his childhood at the Carolinenpalais in Neustrelitz with his parents and siblings, Marie, Jutta and Carl Borwin where he received private tutoring. From 1 February 1891 to 11 December 1898 he was tutored by the Protestant theologian Carl Horn, after which Adolf Friedrich left Neustrelitz to continue with his studies at the Vitzthum-Gymnasium in Dresden where a fellow student was his kinsman the young Grand Duke Friedrich Franz IV of Mecklenburg-Schwerin. In January 1902 he moved to Munich to study law.

On 30 July 1898 Adolf Friedrich was made a Lieutenant à la suite in the Royal Prussian Army’s Grand Ducal Mecklenburg Grenadier Regiment Number 89. As a future grand duke of Mecklenburg-Strelitz he was expected to one day head of the regiment’s second battalion, the first and third battalions being headed by the Grand Duke of Mecklenburg-Schwerin. However Adolf Friedrich’s active army career did not begin until after the conclusion of his studies at which point he joined the Prussian Army’s 1st Uhlan Guards Regiment in Potsdam as a Lieutenant.

The first half of 1904 was a time of sadness for Adolf Friedrich and the grand ducal family. In January he lost his maternal grandfather the Duke of Anhalt while in March his great uncle and godfather the Duke of Cambridge also died. It would be his third bereavement that would have the most impact on his life as with the death of his paternal grandfather Grand Duke Friedrich Wilhelm on 30 May 1904 his father succeeded as grand duke with Adolf Friedrich becoming heir apparent to the throne and Hereditary Grand Duke. From his paternal grandfather he inherited considerably less money than his siblings as he was in direct line to become grand duke and inherit the bulk of the grand ducal family’s wealth and estates.

In May 1907 Adolf Friedrich sailed out of Hamburg with his kinsman and childhood friend the Grand Duke Friedrich Franz IV of Mecklenburg-Schwerin to undertake a month long visit to the German Empire’s protectorates of Togo and Cameroon in West Africa. To commemorate the trip to Lome the capital of Togo, various places and streets were given names connecting them to Mecklenburg including “Adolf Friedrich Place” located near the city’s jetty. Back in Germany he continued to serve in the 1st Uhlan Guards Regiment gaining the rank First Lieutenant on 30 May 1908 and Captain (Rittmeister) on 13 September 1911. In 1911 Adolf Friedrich resigned his army commission although he remained an officer à la suite in his old Guards regiment for a couple more years. He also retained his status as officer à la suite in the Mecklenburg Grenadier Regiment Number 89. The à la suite status entitled Adolf Friedrich to wear those regiment’s uniforms.

Having left the army Adolf Friedrich returned to Neustrelitz in order to study and familiarise himself with the political system of the grand duchy in preparation for his succession as grand duke. He intervened in domestic political affairs in 1913 when he delivered a speech before the joint Mecklenburg Diet calling on the nobles drop their opposition to reform and allow for a constitution be implemented in Mecklenburg.

Thanks to the influence of his grandmother the Dowager Grand Duchess, who was born Princess Augusta of Cambridge, Adolf Friedrich had a great admiration for Britain. He was present at a number of major British royal events including the funeral of Queen Victoria in February 1901, the coronation in 1902 and the funeral in 1910 of King Edward VII, and the coronation in 1911 of King George V. He spent the summers of 1912 and 1913 in Britain and became a well known and liked member of London society.

While hereditary grand duke Adolf Friedrich was seen as one of the most eligible European princes of his day with a possible engagement a topic of newspaper gossip. With his close links to Britain he was at various times linked to King George V’s only daughter the Princess Mary, the king’s cousin Princess Patricia of Connaught and even the morganatic daughter of the British based Grand Duke Mikhail Mikhailovich of Russia, the Countess Zia de Torby, who Adolf Friedrich was regularly seen out with while in London. Other rumoured spouses were Emperor Wilhelm II’s only daughter Princess Viktoria Luise of Prussia, her cousin Princess Margarethe of Prussia and her future sister-in-law Princess Olga of Cumberland.

Having spent ten years as heir apparent in 1914 Adolf Friedrich’s father fell seriously ill. On 7 June while receiving treatment in Berlin his father transferred governing power to Adolf Friedrich. With the death of his father just four days later Adolf Friedrich succeeded as grand duke. He had very little time to mourn the loss of his father and adjust to his new role as that August the First World War broke out and he had to fulfil the grand duchy’s obligations and lead Mecklenburg-Strelitz in support of the German Empire.

With the outbreak of the war Adolf Friedrich took to the field and was given a commission as a colonel on the staff of the German 17th Division (which the Mecklenburg Grenadier Regiment Number 89 formed part of) serving on the Western Front in France. During the conflict he used his friendship with the British born Princess Daisy of Pless to enquire on the welfare of imprisoned British officer friends for his grandmother. He continued to serve on the Western front commanding artillery units throughout the war and in 1917 was promoted to the rank Major General. He also went on to receive both classes of the Iron Cross during the conflict.

Although Mecklenburg-Strelitz was at war and Adolf Friedrich a serving German officer, he was also a sovereign prince with a responsibility and duty to his subjects and as such continued to push for political reform in Mecklenburg just as his father had before him. When negotiations broke down with Mecklenburg-Schwerin over the subject in 1917 Adolf Friedrich’s government contemplated repealing the union of the two states.

With Adolf Friedrich having come to the throne while unmarried and without a son there was an issue surrounding the succession as his heir Duke Carl Michael had indicated just before war broke out that he wished to renounce his rights to the succession. If there was no male heir to Mecklenburg-Strelitz then the grand duchy would merge with neighbouring Mecklenburg-Schwerin. During the war the topic of marriage was discussed by Adolf Friedrich and his friend Princess Daisy of Pless, however in war time it was difficult to arrange a meeting with an eligible princess. Eventually the Princess of Pless identified her husband’s relative Princess Benigna Reuss of Köstritz as a suitable bride. As Adolf Friedrich was agreeable to the match his Minister-President Heinrich Bossart began negotiations to bring about the marriage. However before an engagement could be announced there was the complication of a connection with a women whom Adolf Friedrich needed to be freed from.

While heir to the throne and based in Potsdam, Adolf Friedrich had a relationship with a Hungarian born woman named Margit Höllrigl. He was rumoured to have given her a marriage proposal so he could renounce his succession rights and allow his brother Duke Carl Borwin to become grand duke instead. Any possibility of this happening ended suddenly in 1908 with the death of his brother which left the only other successor to the throne the Russian based Duke Carl Michael. With the succession now uncertain it became essential for Adolf Friedrich to remain heir and one day marry to ensure continuation of the dynasty and the independence of Mecklenburg-Strelitz. As such he attempted to pay off Höllrigl to release him from his promise. But because she was alleged to have been in possession of letters linking Adolf Friedrich’s name with homosexual circles, the publication of which would have caused a great scandal, she was said to have attempted to extract more money from him.

One of the other women identified was the Italian opera singer Mafalda Salvanti who Adolf Friedrich had invited to his summer residence in 1916 and 1917. Adolf Friedrich was alleged to have been the father of her two sons Rolf and Horst Gérard although this claim has been shown to be untrue as letters from Adolf Friedrich to Salvanti, which only came to light around 2008, show that there was no real relationship between them and that they only knew one another after both Gérard boys had already been born. The story that Adolf Friedrich was the father originated from a note written by a Hanseatic city diplomat who had been told the story by Adolf Friedrich’s brother in law Prince Julius Ernst of Lippe.

With the war entering a fourth year and his love affairs possibly going to become public knowledge, on the evening of 23 February 1918 Adolf Friedrich left his residence in Neustrelitz to take his dog for a walk. He never returned and the next morning his body was found in the Kammer Canel with a gunshot wound to his temple bringing about a tragic end to Adolf Friedrich’s four year reign which had been blighted by war. An autopsy found that he had drowned and no weapon was recovered from the scene.

The circumstances and reasons for his death are unclear although in his suicide note he hinted that a woman wanted to discredit him. Rumours surfaced after his death that the German Secret Service had discovered that he had been spying for Britain and that he had been given the choice of being tried as a traitor to Germany or taking his own life, although this story was refuted by his close friend the Princess of Pless. Writing about his passing in her memoirs the Princess of Pless noted “I think the loss of his Grandmother, the apparent endlessness of the War, his heart in England and his home in Germany, and the two countries fighting with each other, just tore him in pieces and he could stand it no longer. Then there was that terrible exhausting chronic hay fever, which, so I am told, leads to the utmost depression.” In the newspapers at the time both Mafalda Salvatini and Margit Höllrigl’s names were also mentioned in connection with his death. The princess who was lined up as his wife, Benigna Reuss of Köstritz, would remain single for the rest of her life dying on 20 February 1982. In 1926 Margit Höllrigl reappeared unsuccessfully suing Adolf Friedrich’s heirs for £162,000 which she claimed was the remaining balance of the £200,000 that Adolf Friedrich had allegedly agreed to pay her for compromising documents.

Adolf Friedrich is buried on Lovers Island in Mirow. In recent years some memorials to him have been unveiled in Neustrelitz.