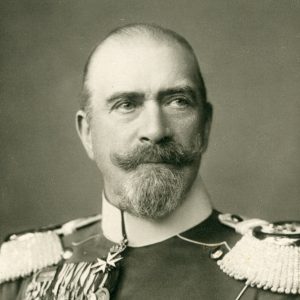 Grand Duke Adolf Friedrich V was born 22 July 1848 in Neustrelitz. He was the only surviving son of the then Hereditary Grand Duke Friedrich Wilhelm and his wife Hereditary Grand Duchess Augusta, née Princess of Great Britain and Ireland. As the eldest son of the hereditary grand duke from birth Adolf Friedrich held the title ‘Hereditary Prince of Mecklenburg-Strelitz’. Through his mother he also occupied 14th position in the line of succession to the British throne and was as such the highest ranking person in the succession without a British royal title.

Adolf Friedrich was born in the midst of the European revolutions of 1848 with Liberals demanding political reforms and Nationalists demanding a united Germany. In Mecklenburg-Strelitz there were demands for a new electoral law and for the dismissal of government ministers. In early autumn with Grand Duke Georg refusing to meet the demands of the revolutionaries, the situation in Neustrelitz became so dangerous that Adolf Friedrich, his mother and his grandparents had to briefly leave the city for the safety of Schloss Hohenzieritz two hours outside Neustrelitz. The move proved to be justified as in Neustrelitz a riot broke with the homes of government minister’s being attacked. With the situation having settled down by early evening the grand ducal family all returned having been at Schloss Hohenzieritz less than a day. The situation would however remain tense for a while afterwards with revolutionaries continuing to threaten the grand ducal family.

During the summer of 1860 Adolf Friedrich and his parents were on a visit to his mother’s family at Kew in London when word reached them that his grandfather Grand Duke Georg was seriously ill. When he died on 6 September the 12 year old Adolf Friedrich became heir apparent to the throne and Hereditary Grand Duke. Throughout his education the young Hereditary Grand Duke was accompanied by his Hanoverian tutor Captain von Petersdorf. The captain was with Adolf Friedrich when he left Neustrelitz to attend a Gymnasium school in Dresden, and again when he attended the University of Göttingen to study law.

With the completion of his studies Adolf Friedrich joined the Royal Prussian Army. He served in the Prussian cavalry during the Franco-Prussian war of 1870 and was on the General staff of King Wilhelm I of Prussia. For his service in the conflict he was awarded the 2nd Class Iron Cross. Following the victory of the Prussian lead German forces, on 18 January 1871, Adolf Friedrich represented his father at the historic proclamation of King Wilhelm I of Prussia as German Emperor at the Palace of Versailles.

In early 1876 while travelling through Germany on his way to Italy, Adolf Friedrich met Princess Elisabeth of Anhalt, the eldest daughter of the Duke and Duchess of Anhalt. Later that year having gone to visit his cousins Princess Marie of Anhalt and her daughter Princess Hilda at their home in Dessau, Adolf Friedrich once again met Princess Elisabeth, proposing to her on 29 December 1876. The engagement, which came as a surprise to Adolf Friedrich’s family, brought some welcome good news at the end of a sad year which had seen the uncle and aunt of Adolf Friedrich, Duke Georg and his sister Duchess Caroline both pass away in June. The engaged couple were 2nd cousins once removed as they were both descended from Grand Duke Carl of Mecklenburg-Strelitz.

Adolf Friedrich and Elisabeth were married on 17 April 1877 at Schloss Dessau. They spent their honeymoon at Lake Geneva in Switzerland. The hereditary grand ducal couple would go on to have four children together: Marie (1878-1948) who married and divorced Count Georges Jamatel, and married second Prince Julius Ernst of Lippe, Jutta (1880-1946) who married Prince Danilio of Montenegro, a son and heir Adolf Friedrich (1882-1918) and a second son Carl Borwin (1888-1908) who was tragically killed in a duel with his brother in law Count Georges Jamatel. As heir to the throne Adolf Friedrich lived with his family in the Hereditary Grand Ducal Palace in Neustrelitz.

After spending 43 years as heir apparent, which makes him the second longest serving heir in Mecklenburg-Strelitz history, Adolf Friedrich succeeded his father on 30 May 1904 when he was aged 55. After coming to the throne Adolf Friedrich made a clean break with the past. Not sharing his father’s animosity towards Prussia he set about healing relations between the two states with his own proclamation as grand duke making well received friendly references to the German Empire. At the grand ducal court in Neustrelitz Adolf Friedrich introduced a more militaristic appearance which had been absent during the long rule of his father, but was one which had become a common sight at other royal courts throughout the German Empire.

Politically Adolf Friedrich was more liberal and open to reform than his father. As grand duke he attempted to modernise the feudal system of government in the grand duchy, which along with her sister state Mecklenburg-Schwerin were the only states within the German Empire that did not have an elected assembly, a fact that brought great criticism on Mecklenburg from within the German Empire and also outside. Some small progress was made in 1908 when Adolf Friedrich introduced a ministerial system of government in Mecklenburg-Strelitz. However major reform such as a new constitution was met with fierce opposition from the nobility. The issue would take up a number of sessions of the joint Mecklenburg Diet without agreement from the nobility who made up an overwhelmingly majority in the diet and could as such block reform. In 1912 after all previous attempts to introduce a constitution had been blocked, to try and break the impasse Adolf Friedrich offered to deposit $2,500,000 from his own personal fortune into the national treasury and surrender certain sovereign rights in order to reach an agreement. In spite of these offers the nobles refused to back down and continued to block all attempts at introducing a constitution. In the end Adolf Friedrich’s reign could be characterised as a long, drawn out and ultimately lost struggle for reform against a powerful nobility.

In March 1914 with Adolf Friedrich’s reign entering its tenth year he was taken ill being admitted into the private hospital of Professor August Bier in Berlin where he underwent an operation. He never fully regained his health and died at the hospital on 11 June 1914. His body was returned to Mecklenburg-Strelitz where it was interned in the family vault in the Church of St John in Mirow. His eldest and only surviving son succeeded him as Grand Duke Adolf Friedrich VI.

Adolf Friedrich’s widow Grand Duchess Elisabeth survived him by 19 years, witnessing the death of her son, the fall of the German monarchies in 1918 and the rise to power of Adolf Hitler. She died on 20 July 1933 in Neustrelitz. As her son never married she proved to be the last Grand Duchess of Mecklenburg-Strelitz and was interned beside her late husband in the family vault in the Church of St John in Mirow with her funeral bringing back to Mecklenburg-Strelitz for a day the lost splendour of Imperial Germany.