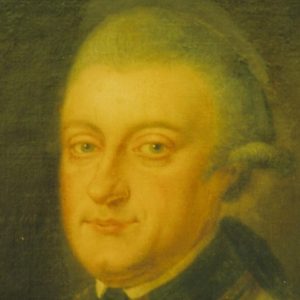 Adolf Friedrich grew up living in Mirow castle where he and his siblings were tutored under the guidance of the Lutheran reverend Gottlob Burchard Genzmer. The year 1752 would prove to be one of great change for Adolf Friedrich. On 5 June a month after celebrating his 14th birthday his father died making him the new heir presumptive to the throne. Later that same year on 11 December, Adolf Friedrich succeeded to the throne after his uncle the reigning Duke Adolf Friedrich III died. While 1752 witnessed his rise to heir and then reigning duke, the beginning of 1753 would witness a bitter struggle for the role of guardian to the minor Adolf Friedrich.

However Adolf Friedrich’s succession would not be a smooth and easy process as a dispute over his guardianship soon erupted as the Schwerin Duke Christian Ludwig II believed that as he was the senior prince of the House of Mecklenburg he should be the young duke’s guardian. In order to advance his claim the Schwerin duke ordered a hundred soldiers to march from Güstrow into Mecklenburg-Strelitz with further garrisons following suit. The first contingent of soldiers arrived in a small village not far from the ducal residence in Neustrelitz a mere two days after the death of Adolf Friedrich III. Accompanying the Schwerin force was the privy counsellor to the Schwerin duke who issued a manifesto outlining Christian Ludwig’s claim to the regency in Strelitz which was based on family compacts and the custom of the land. The Schwerin duke himself sent letters to the estates of the country and to the nobility.

In response to the aggressive action of Schwerin the Court of Strelitz published a manifesto of their own where they outlined that the will of Adolf Friedrich’s father was opened in the presence of the state council with the contents relayed to Duke Adolf Friedrich III who made it known he would not oppose the will if it was to be ratified by the Holy Roman Emperor which it was. In response to the various manifestos several days of negotiation took place between Schwerin and Strelitz but ultimately no agreement was reached. Due to the failure of the negotiations soldiers from Mecklenburg-Schwerin re entered Mecklenburg-Strelitz and this time took possession the ducal residence in Neustrelitz on 28 December 1752. Upon the takeover members of the Strelitz court were forced to pledge allegiance to the Schwerin duke. When word reached Adolf Friedrich that soldiers from Mecklenburg-Schwerin were marching into his domain he and his mother withdrew to the Swedish held Greifswald to avoid capture. During his stay in Greifswald Adolf Friedrich was made Rector of the local university composing and delivering his own Latin oration upon his appointment.

In order to try and break the impasse and bring an end the dispute Adolf Friedrich’s mother filed a complaint to the Imperial Court in Vienna. This was done with the aim of trying to obtain from the Holy Roman Emperor special dispensation to declare Adolf Friedrich of age so he could assume control of the government himself. The Emperor, after taking into account Adolf Friedrich’s maturity declared him of age in January 1753. However this did not have the desired outcome and served only to escalate the problem as when Adolf Friedrich tried to have the message announcing his majority read from the pulpits of the churches the Schwerin duke tried to prevent this from happening and ordered that the churches say prayers for himself, and threatened those who refused with arrest.  It was only when the Imperial Declaration regarding Mecklenburg-Strelitz was published that the Schwerin duke finally backed down in his claim to the guardianship of Adolf Friedrich. With the situation resolved on 4 April 1753 Adolf Friedrich returned from exile in Greifswald and assumed the Strelitz throne.

Although declared of age the government initially was run by Adolf Friedrich’s mother while he finished his studies. Compared to the drama and bitter struggle over the guardianship, Adolf Friedrich would go on to have a relatively peaceful and uneventful reign. Early in his reign in spite of the cooling of relations between the two Mecklenburg states over the guardianship issue, they came together in 1755 when a Hereditary Constitutional agreement (Landesgrundgesetzlicher Erbvergleich) was signed whereby the Mecklenburg dukes power was to be limited by the estates with the nobility acquiring permanent privileges.

With the outbreak of the Seven Years War in 1756 Adolf Friedrich opted for a peaceful approach to the conflict by declaring his neutrality, while the Schwerin duke opted to support Austria. At the height of the conflict Adolf Friedrich became closely linked to one of the belligerents when in 1761 the King of Great Britain and the Elector of Hanover, George III sought to make Adolf Friedrich’s sister Charlotte his queen. After the marriage treaties were completed Adolf Friedrich and his younger brother Carl accompanied their sister on her voyage to Great Britain for her wedding to the king, which took place on 8 September 1761. The marriage not only brought great prestige to the House of Mecklenburg-Strelitz but it also proved a highly advantages match for Adolf Friedrich’s brothers Carl and Ernst who on receiving military positions in their brother in law’s service all left Mecklenburg-Strelitz to take up posts in the Electorate of Hanover while the youngest brother Georg August also left to pursue a career first in the British Royal Navy and then in the army of the Holy Roman Emperor. With his brothers off pursuing their careers Adolf Friedrich was left behind to govern his state. He resided with his unmarried elder sister Christiane in his capital Neustrelitz, spending the summer months in his residence in Neubrandenburg.

As Adolf Friedrich was unmarried rumours of a marriage inevitably came up. In 1763 a couple of years after his sister’s marriage to the King of Great Britain, speculation began to grow that Adolf Friedrich was to marry Princess Louisa Anne the 15 year old sister of the King. Reports of the marriage resurfaced again in late August 1764 when it was announced a marriage contract had been concluded and that Adolf Friedrich would shortly travel to Britain for the wedding. In the end the marriage never took place, having to be put off due to a decline in Princess Louisa Anne’s delicate health. The princess who never married died a few years later in 1769 aged just 19. Adolf Friedrich would also never marry and lived out his days as a bachelor.

In some ways Adolf Friedrich was not a typical prince of his era as he was not interested in popular pursuits such as hunting or shooting, preferring to go for rides in his chariot around his domain. As Adolf Friedrich ascended the throne while a minor never having had a chance to pursue an active military career like his brothers, he was also not particularly keen on military affairs being content as long as there was enough manpower to protect himself, the ducal family and to maintain law and order. He was rather extravagant in other ways however as during his reign he spent considerable amounts of money acquiring estates in order to increase his domestic property holdings and was also fond of holding balls. The extravagance naturally impacted negatively on the national treasury, indeed to such an extent that in 1772 a financial commission had to be set up in Mecklenburg-Strelitz in order to clear the level debt and advert the threat of bankruptcy.

During the last years of his reign Adolf Friedrich was granted the rank of General in the Hanoverian Army by his brother in law King George III in 1788. Adolf Friedrich IV died in Neustrelitz on 2 June 1794 a month after celebrating his 56th birthday. He was buried in the family crypt in Mirow. His brother Duke Carl succeeded him.