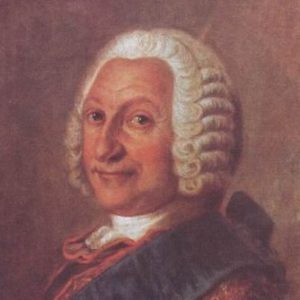 From junior prince to heir apparent

At birth Adolf Friedrich was only a junior prince in terms of primogeniture within the Ducal House of Mecklenburg-Schwerin, and although a grandson of Gustav Adolf the reigning Duke of Mecklenburg-Güstrow, he could not inherit that throne through his mother as the succession could only pass through the male line.

With the death of his uncle the Schwerin Duke Christian Ludwig I in 1692, Adolf Friedrich’s father claimed a joint right to the succession and thus began a long struggle to claim a share of the Mecklenburg inheritance. It was not until 1701 that his father was able to establish the Duchy of Mecklenburg-Strelitz. With his father’s rise to sovereign status Adolf Friedrich became the heir apparent to the throne gaining the title “Hereditary Prince”. After an almost a decade long struggle to become duke, Adolf Friedrich’s father did not enjoy a particularly long reign and with his death on 12 May 1708, Adolf Friedrich succeeded to the throne a month shy of his 22nd birthday.

Adolf Friedrich’s reign did not get off to the ideal start, the first decade of his reign witnessed disputes with neighbouring states, his domains ravaged by a war he had no part in, and a narrow escape with death.

Not long succeeding a relatively minor dispute arose with one of Adolf Friedrich’s most powerful neighbours when King Friedrich I of Prussia married in November 1708 the Schwerin Princess Sophie Louise and subsequently assumed of the title of Duke of Mecklenburg. He assumed the title as an eventual heir to the Mecklenburg lands, the result of the 1442 Treaty of Wittstock whereby the House of Brandenburg would inherit Mecklenburg on the extinction of the ruling house. Although the king had guaranteed to respect the Strelitz lines right of succession if Schwerin went extinct, Adolf Friedrich none the less registered a complaint to the Prussian king as the Mecklenburg title was adopted without any consultation with him, although his protest had little effect and the king continued to use the title.

On 16 April 1709 Adolf Friedrich was married in Reinfeld to Princess Dorothea Sophie of Schleswig-Holstein-Sonderburg-Plön (1692-1765) the daughter of Duke Johann Adolf of Schleswig-Holstein-Sonderburg-Plön and his wife Princess Dorothea of Brunswick-Wolfenbüttel. The new wife of Adolf Friedrich loaned him money to pay for the expansion of the ducal residence Strelitz palace while the Principality of Ratzeburg and Feldburg were put up as security for the loan. The couple had two daughters, Marie Sophie (1710-1728) and Magdalene Christiane (1711-1713).

Although the Great Northern War had been raging for a number of years, as the Mecklenburg dukes had taken no part in the quarrel the duchies had largely been spared. This changed with the entry of Denmark into the war in 1709 when the duchies of Mecklenburg had to face the belligerents violating their neutrality marching and fighting in their domains. The conflict had a devastating impact on the Mecklenburg land and population, leaving Adolf Friedrich with the task of rebuilding the country.

A new capital and improving relations with Schwerin

After the loss of his Strelitz palace in the fire of 1712, and having lived in his hunting lodges for many years, in 1726 Adolf Friedrich ordered construction to begin on a new residence Glieneke on Lake Zierke which was completed in 1733. However due to the distance between his new residence and his capital at Strelitz, it made the running of an effective government difficult to achieve. Therefore on 8 May 1733 Adolf Friedrich called for the creation of a new capital to be built around his new residence. This new capital was named Neustrelitz with the government administration moving from the old capital Strelitz three years later.

After Adolf Friedrich’s brother in law Duke Christian Ludwig II was appointed administrator of the Schwerin government in 1727 relations between the two Mecklenburg states began to be healed. In November 1733 Adolf Friedrich was invited to a diet at Rostock where he was resorted to his common right of assembling diets.  However not all the differences between the two branches of the family were resolved, as disputes remained in areas such as provincial chiefs and the courts of justice. It would not be until 1748 that all the differences between Schwerin and Strelitz were put to rest with the signing of the conciliatory agreement.

With the healing of relations between the two Mecklenburg’s, the last years of Adolf Friedrich’s reign were marred by battles with the diet and the nobility. At the same time his brother in law Duke Christian Ludwig II began to gain more influence over the Strelitz government. With the death of his brother and heir Duke Carl on 5 June 1752, Adolf Friedrich’s nephew and namesake Adolf Friedrich was the new heir, and because he was a minor Duke Carl had named his wife as guardian in his will. Although the Holy Roman Emperor had ratified the will, a few weeks before his death Adolf Friedrich signed an agreement with the Schwerin Duke granting him the right to run the Strelitz government until his nephew came of age.

With Adolf Friedrich’s death in Schwerin on 11 December 1752 at the age of 66, his nephew succeeded as Duke Adolf Friedrich IV although a dispute over his guardianship erupted souring once again relations between the two Mecklenburg states. Adolf Friedrich III was initially buried in the Glineke chapel in Neustrelitz where his body remained until 3 September 1859 when his remains where transferred to the family vault at the Church of St John in Mirow. He was survived by his wife Dorothea Sophie who outlived her husband by 13 years dying on 29 April 1765 aged 73.