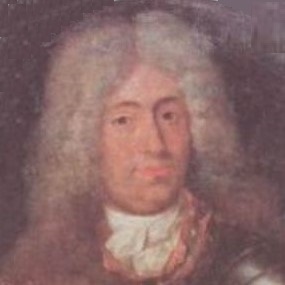 Having reached his majority Adolf Friedrich received little help from his half brother the reigning Schwerin Duke Christian Ludwig I who provided him with just enough money to live on. His cousin Duke Gustav Adolf however proved more helpful and arranged for the marriage of Adolf Friedrich with his daughter the Duchess Maria (1659-1701). The marriage took place on 23 September 1684 in Güstrow. Adolf Friedrich and Maria went on to have five children, although only two survived in adulthood, a son Adolf Friedrich III (1686-1752), and a daughter Gustave Caroline (1694-1748) who went on to marry the Schwerin Duke Christian Ludwig II.

Adolf Friedrich’s claim suffered a setback in 1693 when his nephew was recognised as Duke by the Holy Roman Emperor, Leopold I. An agreement of sorts was reached in 1694 when mediation by the Bishop of Lübeck resulted in Friedrich Wilhelm handing the commandery of Mirow over to Adolf Friedrich. On 26 October 1695 the Güstrow Duke Gustav Adolf died resulting in a reopening of the dispute between Adolf Friedrich and his nephew Friedrich Wilhelm, this time over the succession in Güstrow. Friedrich Wilhelm again based his claim on being the most senior prince of the House of Mecklenburg by primogeniture while Adolf Friedrich based his claim on his relationship to the deceased duke and the fact that Gustav Adolf had asked the Holy Roman Emperor to sanction a partition of his realm. As Adolf Friedrich was in Güstrow at the time of his father in law’s death he could have assumed control of the duchy but refrained from doing so, deciding instead to let the dispute be settled by due process.

Just as in 1692 when the Emperor Leopold recognised Friedrich Wilhelm’s right to the Schwerin succession, in January 1697 Friedrich Wilhelm again found favour with the Emperor when the Aulic council granted him possession of Mecklenburg-Güstrow. This caused a dispute with the Lower Saxon Circle, notably the Elector of Brandenburg, King of Sweden, and the House of Brunswick, who regarded the take over as a violation of their jurisdiction and sent in soldiers to remove Friedrich Wilhelm and the Imperial representative Count Eck. As a result a regency was established in Güstrow while the Emperor ordered a commission to look into the dispute. The commission began proceedings in 1698 and was made up of the King of Denmark (in his capacity as the Duke of Holstein), the Duke of Brunswick, the Bishop of Lübeck and Count Eck.

After three years deliberation the commission came to a decision. Duke Friedrich Wilhelm was to receive the Duchy of Mecklenburg, the Principalities of Schwerin and Wenden, the County of Schwerin and the Lordship of Rostock. Adolf Friedrich on the other hand was to receive the Principality of Ratzeburg, the Lordship of Stargard and the Commandaries of Mirow and Nemerow with his capital at Strelitz. In addition to the territories Adolf Friedrich also received 8000 dollars to construct a new palace and 9000 dollars to be paid to him annually out of the proceeds collected from the Boizenburg toll. A law of primogeniture was also established in Mecklenburg whereby in the event of the extinction of one of the lines, the surviving branch of the family would inherit and untie the whole of Mecklenburg.

Although Adolf Friedrich was advised by some commissioners not to sign the agreement as a courier was on his way from Vienna with news favourable to his cause he was persuaded by his privy counsellor to sign the treaty which he duly did on 8 March 1701 thus ending an almost decade long struggle for his inheritance and resulting in the creation of the new country and princely house of Mecklenburg-Strelitz. When the courier arrived two hours after the treaty was signed it was discovered that the Emperor had ordered the sovereignty of Mecklenburg-Güstrow to be handed over to Adolf Friedrich, but as the treaty was already signed the order was irrelevant. The privy counsellor who persuaded him to sign the treaty eventually fell out of favour with Adolf Friedrich and was dismissed in 1704 ending up in the service of the Schwerin Duke.

The first Duke of Mecklenburg-Strelitz

Adolf Friedrich’s wife Maria did not live to see the signing of the Treaty of Hamburg for she had died on 16 January 1701. Therefore the distinction of being the first duchess consort of the Strelitz line went to his second wife Princess Johanna of Saxe-Gotha, Duchess of Saxony (1680-1704), the daughter of Duke Friedrich I of Saxe-Gotha and his wife Princess Magdalena Sibylle of Saxe-Weissenfels, who he had married on 20 June 1702. This marriage was childless with Johanna dying two years into the marriage on 9 July 1704 aged just 24. Adolf Friedrich married again the following year on 10 June 1705 to Princess Emilie of Schwarzburg-Sonderhausen (1681-1751) the daughter of Prince Christian Wilhelm of Schwarzburg-Sondershausen and his first wife Princess Ludmilla Elisabeth of Schwarzburg-Rudolstadt. He had two further children from his third marriage although only one survived into adulthood, a son Duke Carl, Prince of Mirow (1708-1752).

Not long after his reign began a new dispute arose between Adolf Friedrich and his nephew Friedrich Wilhelm, this time over the signing of Schwerin agreement. The agreement resolved long standing disputes dating back to 1684 between the Schwerin duke and the nobility, and decided how much the states would have to pay annually for the defence of the country. Adolf Friedrich’s reason for opposing the agreement was that he was excluded from the negotiations believing it to be a contravention of the union of 1523.

Once Adolf Friedrich had assumed his sovereign rights he faced the task of building his new country. Mecklenburg had suffered greatly during the Thirty Years’ War (1618-1648) witnessing a decline in both its population and economy, never fully recovering to pre war levels. Once in power Adolf Friedrich set about establishing a central government to efficiently run the country and instigated new tax policies to revitalise farming. In an attempt to build a national economy he purchased large areas of forests using the wood for the construction of new factories and also selling it to Hamburg where it was needed for the ship building industry. He also established his foreign policy and created a military force to maintain order and defend the state from external threats.