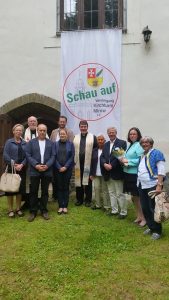 The annual memorial service for deceased members of the House of Mecklenburg-Strelitz was held today on the Palace Island in Mirow.

The ceremony which takes place in the family crypt in the Church of St John on the Mirow Palace Island was lead by the retired catholic Pastor of Neustrelitz, Bernhard Szymanski., Assisted by Felix Evers, Pastor of Neubrandenburg and Christian Brodowski the Pastor at the Chirch of St John. The author Sandra Lembke spoke during the service about the life of Grand Duchess Augusta who died 100 years ago this year.

The memorial service is held annually on the penultimate Saturday of August. Next year’s service will thus take place on 19 August.

Yesterday 19 August at the City Church in Stavenhagen a memorial service led by Bishop Baron Andreas von Maltzahn was held for Duchess Ekaterina (Katharina), born Grand Duchess of Russia, to mark the 150th anniversary of the Katharina Foundation which she founded and bears her name. The historian Marco Zabel read out an address from His Highness The Duke during the service.