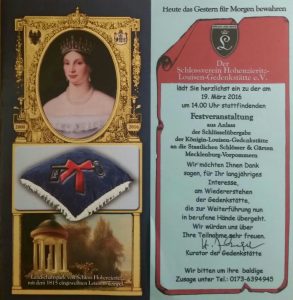 Today the seasonal opening of the Louise Memorial at the Hohenziertz Palace took place. The memorial which was established in 1813 by Duke (later Grand Duke) Carl is dedicated to the memory of his daughter Queen Louise of Prussia, consort of King Friedrich Wilhelm III, who died at the palace in 1810.

This year’s opening ceremony saw the handover of the running of the memorial from the Hohenziertz Palace Association to the Finance Ministry of the State of Mecklenburg–Vorpommern. In his speech Culture Minister Mr Mathias Brodkorb praised the members of the association, in particular Mr Hans-Joachim Engel the long time director of the memorial, for their work over the years maintaining the memorial to Queen Louise.

Dr Rajko Lippert, chairman of the Mecklenburg-Strelitz Cultural Heritage Society, read out the greeting of His Highness The Duke of Mecklenburg who expressed his hope for the continued success of the memorial, which receives 10,000 visitors a year, following the handover.